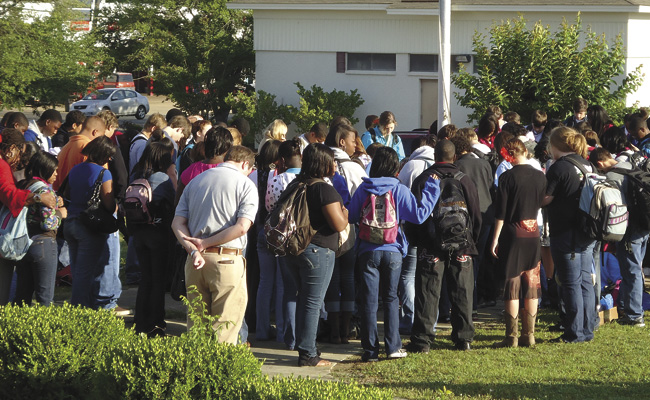 Demopolis mayor Mike Grayson started the festivities off by welcoming a crowd of more than 50 people to the gazebo downtown just after noon Thursday.

After opening with remarks about the importance of togetherness and the opportunity to pray in a public forum, Grayson turned the podium over to Ed Rush of First Baptist Church.

FBC’s music minister led the crowd in the singing of God Bless America before Lacornia Harris stepped to the microphone for the first meditation by the ensemble in its observance of National Prayer Day.

Common themes throughout the near 30-minute session were the tornado outbreak that recently ravaged much of Alabama as well as pressures currently facing local, state and federal governments.

“You have blessed us. You have held us in your hand and protected us from the storm,” Harris said as his first prayer focused on the storms, taking time to concentrate both on the welfare of those victimized by the outbreak as well as expressing gratitude the Demopolis was spared.

“We realize that we need to do whatever we can to help those in need,” Harris said. After Harris concluded, new FBC preacher Carl Williams led a prayer focused on government and protection.

“We pray that those in our federal government realize that Jesus is the answer,” he said. “We pray for our president, Barack Obama. We pray that you would hold him up and surround him with Godly counsel. We pray for our military. We are thankful even this week for those brave men and women who went into that compound and brought justice for our nation.”

“We know we can pray on our own, but there is power when your people come together,” Atkins began. “We pray that (Bentley) would seek you in his decisions. We ask that you would give us judges in your land that would honor you.”

After a few minutes, Atkins turned the podium over to Frank Stiff, who said a prayer on behalf of local and civic leaders as well as continuing the theme of expressing gratitude for the city having been spared from recent natural disasters.

“We give you thanks in the midst of the storms that came around in the last couple of weeks, for protecting our cities,” Stiff remarked.

Harris, a veteran, followed with a prayer on behalf of the United States military.

“For many you have carried to places and allowed them to go to places they have never been before,” Harris said. “But you are there. And I thank you for it.”

Mickey Green wrapped up the session with a prayer that expressed thankfulness for allowing such a group to come together.

“We just give you praise and glory for every word of prayer uttered here today,” Green said. “We bless you for this day and this privilege.”