MA’s Sammons is AISA Teacher of the Year 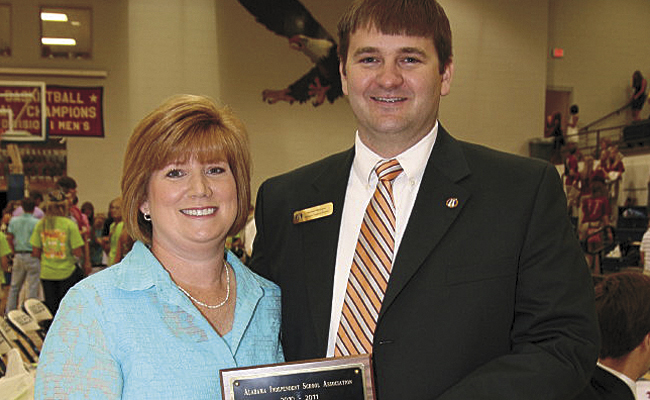 Wendy Sammons attended the State SGA convention recently and was honored as Elementary Teacher of the Year. Pictured above, she receives her plaque from AISA Academic Director Michael McClendon.

This will go down as a spring to remember for Marengo Academy teacher Wendy Sammons.

A 12-year veteran of the school and a 15-year educator, Sammons spent Tuesday in Montgomery watching her oldest son, Christopher, bat in the middle of the Longhorn baseball team’s lineup as it competed in the AISA Class AA State Championship.

Only days from now, she will watch Christopher walk across the stage and receive his high school diploma as he not only graduates, but is honored as the school’s valedictorian.

But the prologue to all her springtime memories came recently when she accompanied the Marengo Academy Student Government Association to the AISA’s SGA convention at Faulkner University in Montgomery.

It was there that Wendy Sammons received the award as the AISA Class AA Elementary Teacher of the Year.

“Very surprised. I was overwhelmed,” she said of receiving the honor. “I was shocked really.”

Wendy was nominated by the Marengo Academy SGA, a student organization which also features both Christopher and her younger son, Joseph.

Despite the family connections, nepotism did not play a role in her selection by the group. Rather, it likely had to do with her extensive involvement at the Linden based school.

She also maintains the school’s Website and Facebook page as well as her own teacher’s Website, while simultaneously serving as the sponsor of the Elementary Honor Society.

But amid all the involvement and all her professional accomplishments over a 15-year career, it takes no time for her to point out what is at the head of her vocational highlight reel.

“It’s a wonderful honor. It was an honor to be nominated. It was rewarding to win.”

Moreover, she got to celebrate the occasion in front of two of the most important men in her life and both Christopher and Joseph were in attendance at the Faulkner University convention.