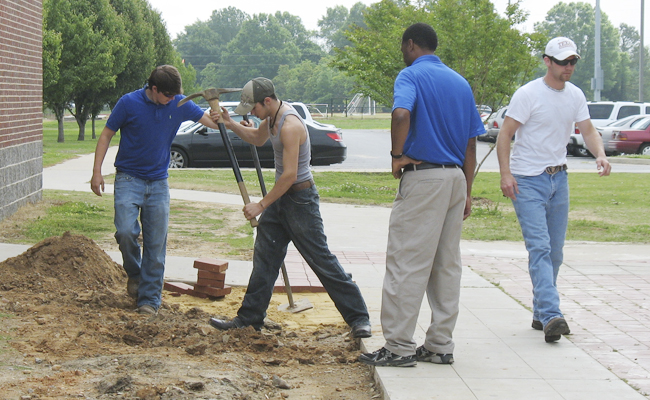 Charles Jones and three of his Industrial Arts students prepare the surface to lay pavers. From left are Justin Hoggle, Walter Dodson, Jones and Curtis Lovejoy.

What was hoped to be a fundraiser for the Demopolis City Schools Foundation became a casualty of progress shortly after it was christened in 2007 when construction equipment and the expansion of the high school took its toll on the concrete pavers.

“When I saw it, I almost cried,” said Foundation Director Jan McDonald. “It was completely destroyed.”

Supporters of the Foundation had purchased engraved pavers ranging from $50 to $90 each, which were placed in the courtyard as part of the fundraiser. Previously placed pavers were destroyed or removed by heavy machinery and, with no place to put new ones, the fundraising effort was put on hold.

“We already had (pavers) that we knew we had to replace,” McDonald said of the Foundation’s effort, “and there was no rush to put any new ones down because they would get damaged as well.”

With construction at the high school now complete, Charles Jones’ DHS Industrial Arts students have been working on replacing the pavers for the past several weeks, and expect to have the process completed by week’s end.

That is welcome news for McDonald and the Foundation, who will close the books on their 2011 donation year in a little more than seven weeks. McDonald noted this year’s donations are down slightly compared to last year at 3.4 percent, but there were several donors currently outstanding.