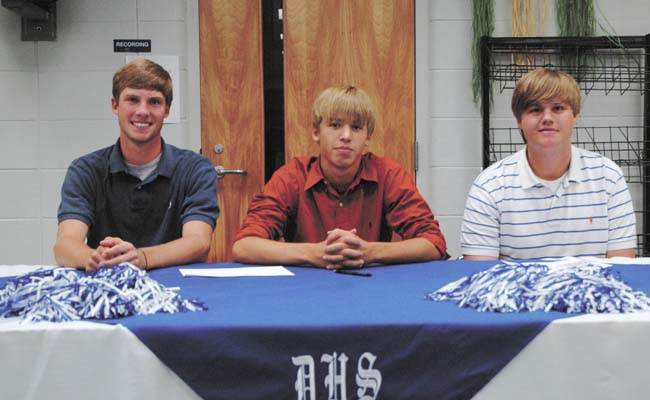 Cameron Fendley, who signed to play soccer at Auburn-Montgomery, became the fourth DHS soccer player in five years to ink a scholarship offer.

“I was ecstatic really,” Fendley, who scored 18 goals for the Tigers in 2011, said of receiving the offer. “It was just something I wanted to do. I jumped at the offer.”

“(Auburn-Montgomery is getting) someone that will give them 100 percent every time he steps on the field,” Demopolis soccer coach Dr. Peter Keen said. “He’s very versatile. I could play him at any position.”

The son of Tammy and Jeff Fendley, Cameron cited his touch and vision as areas that need improvement as he readies himself for the next level.

“Once you get to college, it’s a different level,” he said. “The speed of the game is three times as fast.”

Keen believes Fendley’s hustle and speed will benefit him greatly as he attempts to transition his game to the NAIA level.

Fendley accepted the Auburn-Montgomery over a similar option from Delta State, citing proximity to home among the bevy of reasons he preferred becoming a Senator to becoming a Statesman.

“(Distance to home) was another reason why I turned down the Fighting Okra,” Fendley said.

“It’s huge for the program,” Keen said of the success DHS has had in signing players to the next level. “This is a program that, years ago, was not winning games or even scoring. Now you have kids signing with colleges.”

Pettus inked his commitment to Lurleen B. Wallace in Andalusia, opting to take the two-year junior college route in hopes of ultimately landing a spot at a larger school.

“One of my main reasons for going to LBW is I am going to try to earn a scholarship to Troy after that, or any Division I college really,” Pettus said.

A starter for Demopolis since his freshman year, Pettus, the son of Mark and Becky Pettus, played shortstop and catcher in 2011 in addition to maintaining regular pitching duties. At LBW, he projects to pitch some and serve as an infielder.

For Cameron, Thursday proved the culmination of an arduous recruitment process that saw lightning strike twice.

Cameron was selected to pitch for the South team in the North-South All-Star game last summer, an invitation he accepted in hopes of garnering collegiate attention. The game was rained out and never rescheduled.

Cameron later received an offer from the University of Alabama-Huntsville, a school that ultimately saw a coaching change who prompty withdrew the scholarship.

Cameron then landed offers from both Bevill State and Jefferson State community colleges, scholarship opportunities that quickly evaporated as both baseball programs were shut down due to financial issues.

“It was really just waiting around to see what happened and getting out and trying to get people interested in me,” Cameron, who signed with NCAA Division II Montevallo Thursday, said of the process. “The coaches at Bevill and at Jeff State are really good friends with the pitching coach at Montevallo. They told him about me.”

The tip led to a visit to see Cameron pitch, which led to heightened interest as the senior hurler battled Brookwood for nine innings of work in game two of a first round playoff double-header just weeks ago. Cameron soon made the trek to Montevallo’s campus.

“The campus, it blew my mind how nice it was,” he said. “It was the best kept secret I had ever seen.”

After months of waiting and continually having the proverbial rug pulled out from under him, Cameron will spend the next four years in purple and yellow and pitching for the Falcons.

“They were just excited, just proud that I was going to get an opportunity to play somewhere,” he said of the reaction of his parents, Chris and Lauri Ann Cameron.

Hornets’ Bennett signs to be an Eagle