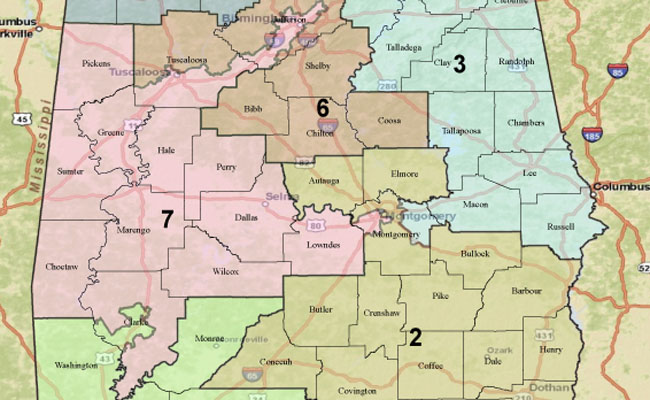 Every 10 years the Legislature must draw new districts equal in population based on new census data.

If successful and ratified, the districts will be used for the 2012 elections.

According to the recent census, Terri Sewell’s 7th Congressional District fell approximately 80,000 residents short of the necessary population. Congressional districts must have the same number of residents, so to help make up that difference, the new plan called for an extension of the 7th District into western Montgomery County.

The addition of a portion of Montgomery County to the 7th District offsets the loss of population since the 2000 Census.

The remainder of the county would continue to be in Martha Roby’s 2nd District and Republican Mike Rogers’ 3rd District. Statewide, Montgomery County would be the only county split between three congressional districts.

The committee’s co-chairman, Republican Rep. Jim McClendon of Springville, said the committee wanted to make sure that Sewell, Alabama’s lone black representative, maintained a majority of black voters in her district, adding the only way to accomplish that was to expand the district into Montgomery County.