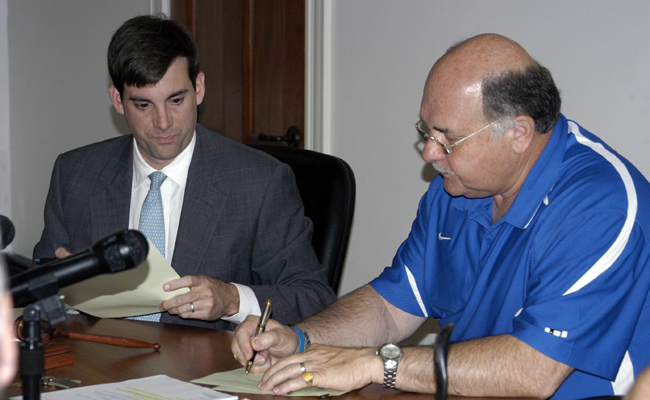 The City of Demopolis entered into a loan agreement for more than $4 million dollars Friday, hopeful that investment will lead an industrial boon on the city’s waterways.

The city will use the proceeds of the $4.5 million loan on behalf of the Industrial Development Board (IDB) to purchase the property currently owned by Cenac (CTCO) at the Airport Industrial Park.

The IDB’s principle interest is the waterfront access, which they and others see as a viable site for a port. The building previously occupied by CTCO would be leased to a yet-to-be-determined entity with the proceeds from the tenant used to help repay the loan.

“We have two companies interested in leasing the building right now,” IDB chairman Mike Marshall said. “And I think there will be a lot more interested soon.”

Marshall said word-of-mouth of the site’s potential availability has spread quickly and that would be expedited once the city formally takes possession.

“We’ve got people calling about that site and we can’t even market it yet because we don’t own it,” Marshall said. “Once we can formally market the property, I think we’ll have a lot of companies interested.”

The two parties currently interested in the site, Marshall said, would bring approximately 100 jobs and would make significant capital investments in infrastructure.

Formally owning the property and having a viable tenant to help offset the bank note, Marshall said, the IDB would finally be in position to begin work on developing the Demopolis Intermodal Complex.

“Buying the property is step one,” he said. “The next step is seeking financing for dredge work that has to be done and there’s infrastructure improvements like the cranes that have to be installed. We’re only a few steps in a long process but they’re big steps.”

Ultimately, the IDB hopes to see the site developed into an intermodal complex with its access to highways, water, rail and air. Potential suitors in the form of site managers have already been in contact with city and IDB leaders and are monitoring the site’s progress.

The city and IDB currently own more than 100 acres at the site.

Of the $4.5 million, $4 million will be used to purchase more than 70 additional acres previously occupied by CTCO.

The other $500,000 will be put toward site engineering, studies and consultants as the IDB seeks to ready the site for further development.

Marshall anticipated closing on the property purchase in the next few weeks.

After teetering on the brink of closure for more than three months, administrators at Bryan W. Whitfield Memorial Hospital expect... read more