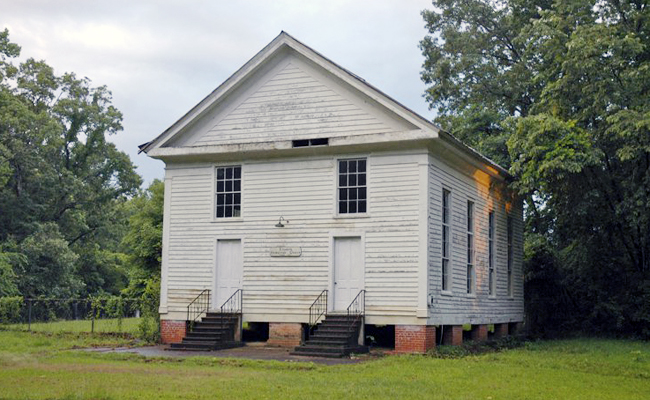 Since 1994, the AHC and the ATHP have joined forces to sponsor Places in Peril, a program designed to highlight some of Alabama’s most significant endangered historic sites.

“Places in Peril is a valuable tool in directing public attention to the many historic places in Alabama that are under threat from neglect or demolition,”said Frank White, executive director of the AHC. David Schneider, executive director of the ATHP states, “This list reminds us that much remains to be done to help Alabamians recognize that our historic places are essential community assets. These places represent one of the greenest approaches to providing places in which to live and work.”

A group of Sumter County residents established the Elizabeth Presbyterian Church in November 1838 about nine miles south of York. Elizabeth Knox donated the land where the the first church was built, and it was named in her honor. Seven years later, the congregation moved their church nearer to the town of Gaston, a bustling little village that was more centrally located for the membership.

The growing congregation replaced the original log structure in 1858 with a wooden frame, two-story building. Slaves were members of the Elizabeth Church and remained part of the congregation after they were freed until the 1870s. Members also established a small cemetery on the property.

Economic developments and demographic changes have been unkind to many of Alabama’s rural areas. The descendents of those who settled these regions have moved to pursue opportunities elsewhere. When they leave, they leave behind structures like Elizabeth Presbyterian Church, a building where generations gathered to celebrate life and mourn loss.

Today, a congregation of less than five members owns the church.

The church is threatened by neglect, as the congregation is unable to maintain it.