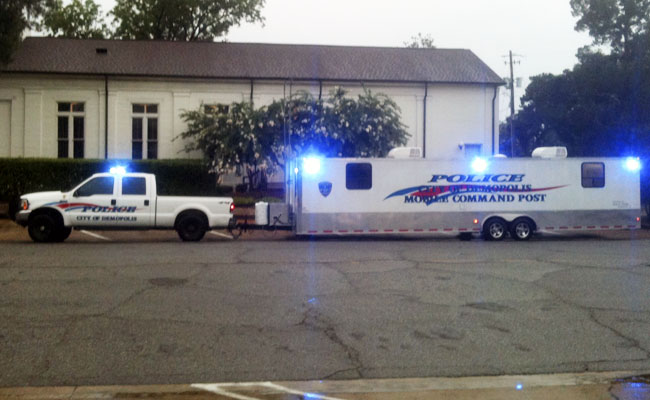 The Demopolis Police Department was officially presented with the newest addition to its fleet Tuesday night.

RockTenn presented the department with a mobile command post and truck, which Demopolis Chief of Police Tommie Reese said has already been put to good use.

“The officers we sent to Tuscaloosa spent four days in it,” he said of the staff Demopolis sent to assist the tornado ravaged city following an April 27 tornado outbreak. “That was pretty much their home and headquarters.”

Reese said the unit was like “a police station on wheels”, complete with radio communication, Internet access and satellite television.

“In the event of severe weather, like the tornadoes that hit Marengo County, we could pull the command post to the area and monitor the weather as well as communicate with units on the scene, which would take a load off of 911 in the event of a major incident.”

While the unit will primarily be utilized in the event of severe weather or a significant emergency, Reese said it would also not be uncommon to see it at some of the city’s largest events.

“We’ll use it at †some of the football games,” he said, “and Christmas on the River, Freedom on the River, Hay Dayz and things like that. We might use the command post anywhere we have several officers for an extended period of time, to use as their base.”

Reese thanked RockTenn for the donation which made the venture possible, pointing out this unit was simply the most recent showing of the mill’s support of the city which it calls home.

“RockTenn has been an awesome partner for Demopolis,” he said. “I can’t thank Carl Wright, Chuck Smith and everyone at RockTenn enough. And that’s a thank you on behalf of the entire Demopolis Police Department.