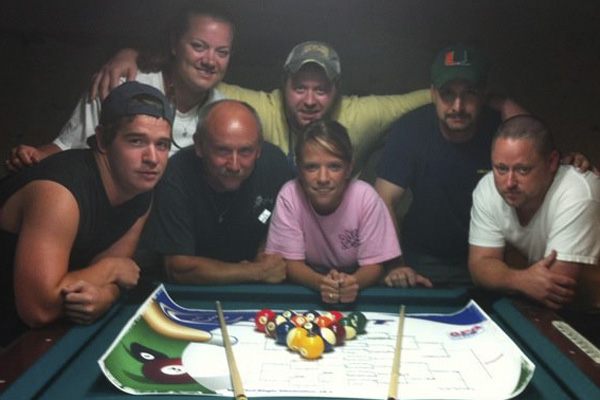 Seven friends have the opportunity of a lifetime after recently shooting their way into the national championships and a trip to Las Vegas.

“Most of your bigger cities are going to have leagues,” Barkley explained. “Everybody on our team drives to Meridian every Tuesday night to compete.”

Each year features three 15-week sessions with the winners advancing through a regional qualifier that gives them the right to compete at nationals in Las Vegas, Nevada.

After 15 weeks, the five Demopolis and two Bellamy residents are now focused on sharpening their games in preparation for their shot at nationals, which will come Aug. 21-27.

“We all love to shoot pool,” Barkley said. “Brian, Chris and Eric have all been shooting (in the APA) for two years. We started finding out about it because there were some of them who kept going to the pool halls in Meridian and people kept telling them they should join the APA.”

The team, which was known as the Alabama 8-ballers when it earned its Meridian championship, will travel to Vegas as the Alabama Q Crew, a new name that provides a shout-out to the facility that it calls home.

“Our home location is Meridian and our hall is called Miss Q’s,” Barkley said. “So we’re kind of throwing a nod to them with our name.”

While the trip to nationals will be exciting for the team, the competition promises to be tough as it will go from competing against 14 teams in Meridian to hundreds in Las Vegas.

“We are going to be competing against about 600 other teams when we get there,” Barkley said.

But, before the team can depart, it first has to make sure it can afford the travel expenses as the APA guarantees the squad a spot in the draw, but not in a hotel.

“We’re getting a travel fund, but it’s not enough to get all seven of us to Vegas and pay for our hotel rooms in Vegas,” Barkley said, pointing out that the team is putting together fundraisers as well as accepting donations to fund its trip. “Absolutely anything that anybody would want to donate would be much appreciated.”

Should the Alabama Q Crew manage to work its way through the difficult waters and land a national championship, it will return to Demopolis some $25,000 richer than when it left, leaving something more than bragging rights on the line in Las Vegas.