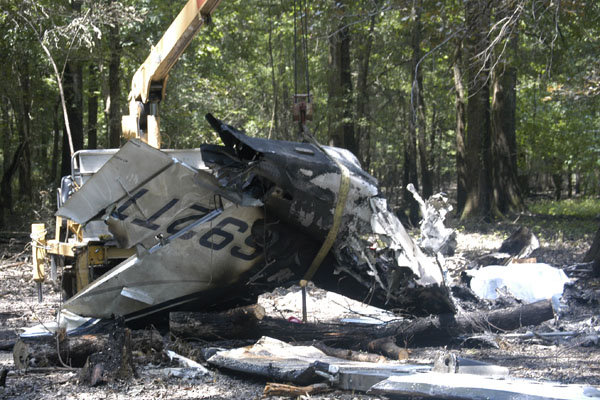 Seven people were killed Saturday when their small plane crashed barely more than a mile away from the Demopolis Airport as they were returning from a family reunion.

The aircraft, a twin engine Cessna 421C, was en route to Destin, Fla. from St. Louis when it attempted to divert to Demopolis after an engine failure. According to the Federal Aviation Association (FAA), the plane had departed Creve Coeur Airport in Missouri on its way to Destin, Fla.

“Losing an engine creates an emergency,” said Demopolis Airport Manager Buzz Sawyer, “but under normal circumstances, you can fly on one engine. It’s not ideal, but you can do it. A plane like (the Teutenberg’s) – one that size – ordinarily should be able to make it on one engine for a while.”

Luke Schiada, an investigator with the National Transportation Safety Board (NTSB) agreed with Sawyer’s assessment but added there were many other factors in play.

“You have to take into account the weight and balance of the plane,” he said. “The weather, wind and other things…but, yes, a plane like that would be capable of flying on one engine.”

Sawyer said the Demopolis facility received a call from Meridian who relayed the emergency call received from Teutenberg to Demopolis, adding that the plane was being diverted. However, that plane never arrived.

“All we knew was that a plane had an emergency and was being diverted here with seven people on board,” said Sawyer, who drove from his home to the airport to escort the family from the plane. “But when I got there, of course, no one was there.”

The plane went down in a wooded area north of the Demopolis airport, killing all seven on board. The couple’s oldest daughter, Ashlei Bruewer, 16, a native of St. Louis, was not aboard the plane.

The wreckage was found at 2:17 a.m. Sunday morning.

First responders on the scene, which included the Demopolis Police Department and the Marengo County Sheriff’s Office, said they found the plane upside-down with one of its wings broken off, the likely result of an impact with a tree.

The FAA and the National Transportation Safety Board (NTSB) are investigating the cause of Saturday’s accident, which is the deadliest plane crash in the United States so far this year.

In March, five people were killed when a small plane crashed at Long Beach Airport in California.

The wreckage will be transported over the next few days to a recovery center in Atlanta.

Schiada said a preliminary report detailing the investigation would likely be made available next week, however, a conclusion could take several months, if not a year.

Investigators left the site yesterday afternoon. They had been using the Demopolis Police Department’s Mobile Command Center as it’s headquarters.