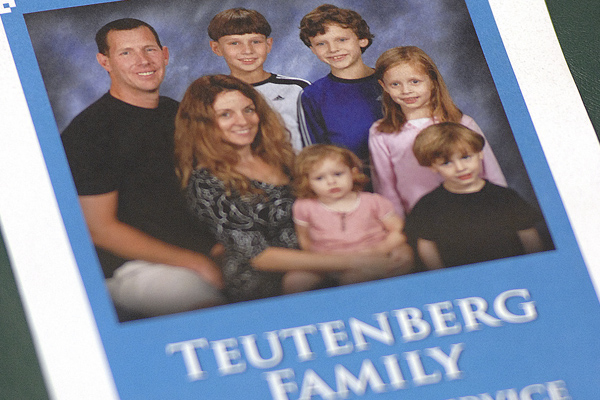 NICEVILLE, Fla. – Fred Teutenberg was a jack of all trades, balancing his own Information Technology business with volunteering at the Niceville United Methodist Church. But what he loved more than work was flying. It was a hobby which proved tragic, claiming his life and the lives of his family members.

“I don’t believe it. I keep putting myself in the cockpit of that plane with him and envisioning what he was doing when that thing was crashing, and I cannot get that out of my head,” said Blane Pearson, the church’s Minister of Administration.

Seven were on board, including Fred, his wife Terresa and their five children, ages two to 10.

“I can just see him, working and moving those controls, doing everything he could to get that thing down. And it’s just burned in there. It’s going to take a while to get over it,” Pearson said.

Pearson handles information technology for the church, and Fred was his right hand man. They shared a small space together, where close quarters spurred a close friendship.

What he finds especially heart-breaking about all this is that the family is survived by only one – 16-year-old Ashlei Breuwer of St. Louis, Terresa’s daughter from a previous marriage.

“She’s all by herself. Her whole family is gone. That’s just devastating to me to think about. As hard as it hits me, I can’t imagine what it’s like for her,” Pearson said.

Pearson said Fred volunteered at the church at least 50 weeks a year.

“Fred played bass in one of our praise bands and his IT company provided our computer technology support,” said Rurel Ausley, the church’s senior pastor. “He was an integral part of our team and served our church well and faithfully.”

On Tuesday nights, you could catch Fred in the Community Life Center practicing with his band, but this Sunday, they’ll be forced to play without him for the first time.

“It’s going to be really strange to not have Fred with his energetic playing and self onstage, helping to lead in worship. There’s no one like him. He’ll be sorely missed,” said band-mate and Creative Arts Minister Andrew Griffin.

“Fred was a very gifted, yet truly humble person and was deeply loved by all that knew him,” Ausley added.

“On Wednesday nights, we always saw Fred and Terresa’s table full with their beautiful family. The Teutenbergs came to us through the ministry of Upward Soccer and their faith has ministered to us throughout our church. We love them and will deeply miss them.”

Fred’s dedication to his church was only matched by his devotion to his family.

“The kids were with them all the time. She would come over and drop off a supper for him and I, and all the kids would be in the car, and we’d go out there, and we’d have to spend 10 minutes, joking around and playing with the kids and everything,” Pearson said.

In such a tragic set of circumstances, Pearson takes solace in one thing. The Teutenbergs made the most out of their time here and were together up until their final moments.

A Memorial Service was held Friday, July 15, at 1 p.m. for the Fred and Terresa Teutenberg and family in the Community Life Center at Niceville United Methodist Church.

“This is a time for the Niceville UMC family to come together, reach out to our Lord, and draw strength together for the living of these days,” Ausley said.

Jason Cannon contributed to this. report.