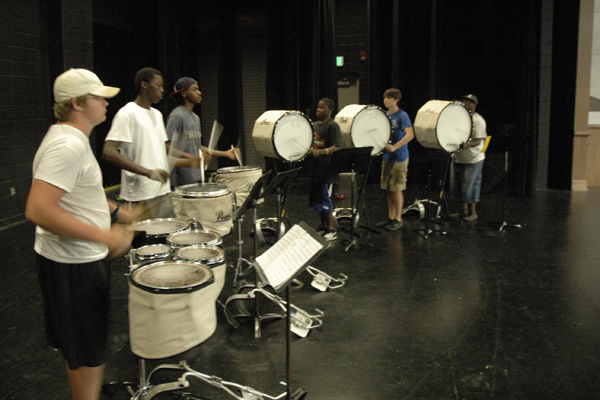 While the drumline and other auxiliary units got to work Monday, the Demopolis High School band will begin the bulk of the work toward its 2011 halftime show next week.

This year’s halftime show will feature a series of songs from 1970s and 1980s rock band Queen.

“We’re kind of moving away from a lot of the Broadway style show we did last year,” DHS band director Matt Fields said.

The collection of songs will include We Will Rock You, Somebody to Love, Crazy Little Thing Called Love, Bohemian Rhapsody and We Are the Champions.

“I’m always listening to stuff and getting ideas,” Fields said. “This show is one I’ve hand picked for several years and have just kind of been waiting for the right time to do it.”

When the 64 members of the band get together next week, there will be a number of changes from years past.

“We’re changing it up and it is a little bit different this year,” Fields said. “Instead of coming in at 8 a.m. and working until 5 p.m. We’ve shifted everything back and we’re going from 1 p.m. to 9 p.m.

“The kids go home and they stay up anyway, so we’ve adapted everything to their normal summer schedule.”

The band will spend the first four hours of its day working on music before taking a lunch break and returning to practice to spend its final three hours on marching practice.

“I think it is going to help us out a lot,” Fields said of practicing primarily in the evening hours. “It will be cooler when we go out there.

“They’ll be coming off a dinner break, so hopefully they’ll be fueled and hydrated.

“When we marched in the morning, it took them a good half hour to get woken up.”

In addition to altering its summer practice schedule, the DHS band will feature new, younger faces this year when it marches middle school students for the first time.

“I had some beginners last year that really stepped up and did a good job, so I decided to let them get started marching with the high school a little early,” Fields said.

The auxiliary units spent the first part of the week working with individual coaches who specialize in their respective areas.

The individual time being put in with the auxiliary groups is important, according to Fields, given that the DHS band has not had majorettes or a flag corps in a number of years.

“It is so important to get as much as you can done during camp because once school starts back you limited with rehearsals after school and you have so many different things going on,” Fields said.

The band will also put on a special show during halftime of Demopolis’ Sept. 9 game against Central-Tuscaloosa.

“On Sept. 9, we’re planning to do a tribute show for the 10th anniversary of the September 11 attacks,” Fields said.