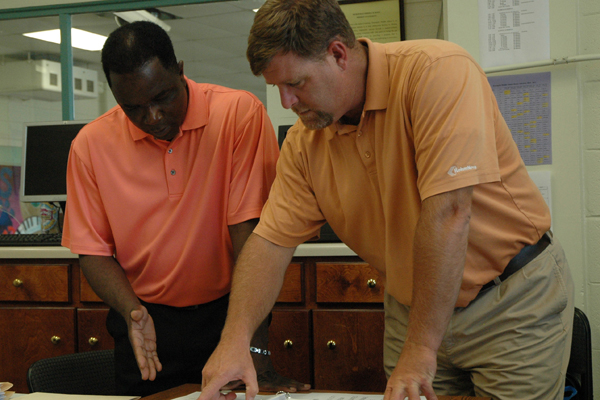 Rollie McCall and Chris Tangle will be the next team to head up DMS.

Demopolis Middle School will have a new administrative makeup this school year after Chris Tangle was named interim principal earlier this week. Tangle will rely heavily on long-time colleague Rollie McCall, who the Demopolis Board of Education named interim assistant principal.

The moves came in response to the retirement announcement of outgoing DMS principal Booker Barlow, who will officially end his four-decade-long educational career Sept. 30.

“Chris has a broad base of administrative experience,” DCS superintendent Dr. Al Griffin said of Tangle, who rejoined the DCS family for the 2009-2010 school year. “He’s been an assistant principal, transportation supervisor, maintenance director. He just comes across as a guy who is going to take a no nonsense and common sense approach.”

Tangle spent nine years in the Demopolis City Schools system before working for four in Marengo County Schools. His experiences have ranged from teaching physical education and coaching to working as an assistant principal to overseeing maintenance, child nutrition, transportation and various capital projects.

“I have a wide knowledge of transportation, sports, academics, maintenance and child nutrition,” Tangle said of his professional experience. “I think I will be pretty productive here because I have had so many different jobs in this system.”

“He is a man with experience at wearing many hats,” Griffin said. “I know he and Mr. McCall will work well together. They seem to be very motivated.”

While Tangle spent last school year as the assistant principal at the high school before shifting to the middle school near the end of the spring semester, McCall ascends to an administrative role after spending the majority of his career teaching science.

“This opportunity gives me a chance to step into a long line of leaders in this great system,” McCall said. “It gives me an opportunity to hone my skills and develop them for future applications.”

The duo will oversee middle school activities this school year before both positions are opened up in May.

“We put in some interims to bring some stability for the entire year,” Griffin said. “At the end of the school year we will open (the positions) up and the two (individuals) who are there now are definitely eligible to apply.”

With respect to the task at hand, Tangle said he believes the largest task for the new administrative team will be to keep the school’s progress continuing forward.

“The middle school has been in pretty good shape for several years,” Tangle said. “I don’t plan to reinvent the wheel. I plan to just keep it going. We’ll learn what we need to keep and what we need to change.”

Barlow will spend his final months with the system working in a consulting capacity.

“Mr. Barlow is going to serve in an advisory capacity for the high school and the middle school until Sept. 30. It is kind of like he is going to be on call you might say,” Griffin said. “We are going to miss Booker Barlow. He had a great year out there (at Demopolis Middle School). We definitely want to wish Mr. Barlow well on his retirement.