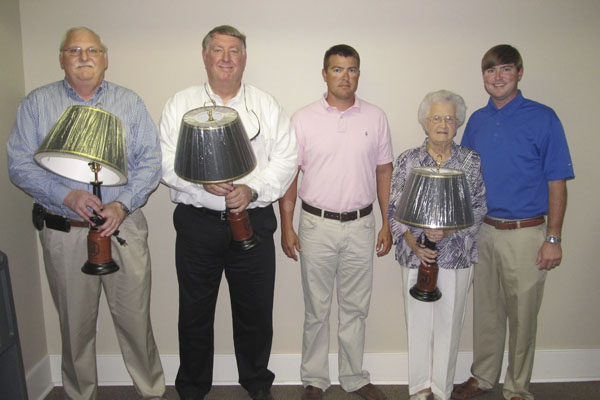 Members of the Demopolis City Schools Foundation received thanks and recognition Monday, August 8, at the 16th annual Appreciation Celebration.

Held in the Coplin Building, the after-hours event encouraged members to continue “answering the call” to support the work of the Foundation.

Lori Giles, librarian at Westside Elementary School, received the $1,000 award named for the late co-founder and charter president of the Foundation. The Lloyd Award recognizes teachers who have demonstrated their commitment to the mission of the Foundation: to foster and promote excellence within the Demopolis public school system.

Recognized during the event as Executives for the 2011 fiscal year were Georgia-Pacific Company; Parr’s, Inc., and Rock-Tenn Company. Each received an engraved lamp.

Executives not attending the celebration were the Daniel Foundation of Alabama and Friends of Education I.

Patrons received a plaque featuring artwork by Grant Tate, a student at U.S. Jones Elementary School. Young Tate was given a plaque with his art displayed and a $25 check.

Not attending were Dr. and Mrs. Paul Ketcham and the Rotary Club of Demopolis.

Not attending were Bank Trust of Demopolis, Billy and Betsy Coplin, William and Judilyn Horton, Prystup Packaging Products and Fred and Mary Rutledge.

Robertson Banking Company also received a Chair from the Foundation for a cumulative investment of $25,000 in the Foundation. The chair was earned in 2010 but came too late for the recognition to be awarded at the last Appreciation Celebration.

Kim Townsend, vice president, and Jenn Tate, chairman of the Nominating Committee, gave a review of the Foundation’s year and a preview of things to come. The economy continued to impact the Foundation, but at the end of June, the Endowment Fund had reached $630,000. This year the full $50,000 budgeted will be awarded in grants instead of filling in the slack left by the elimination of teacher-fee money by the state.

Those at the event were encouraged to attend Hay Dayz on September 10, a joint venture of the Foundation and the Demopolis Area Chamber of Commerce.

The Foundation also is proud of the recognition it received during the school system’s accreditation this spring through its financial support and commitment to continually improve Demopolis City Schools.