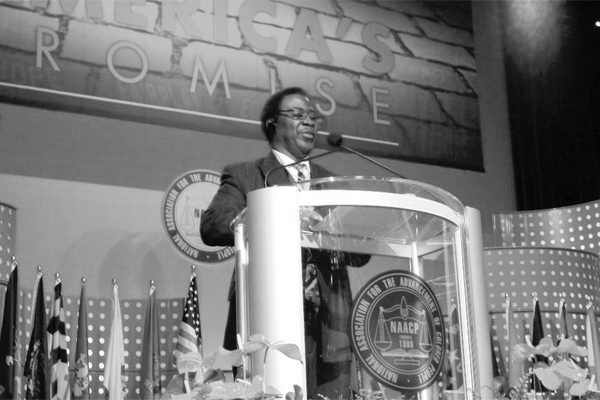 More than 42 youth and adult delegates from regions Across the association participated in the election. In addition, he was awarded the NAACP National Million Dollar Club Award and the Club 100 Award for Exemplary membership recruitment. This is the third time he has received the Million Dollar and Club 100 award.

The first award was presented at the National Centennial Convention in 2009 New York City, second in Kansas City, Missouri in 2010, and again in Los Angeles in 2011.

In March, he was honored as the recipient of the prestigious Medgar Evers Leadership Award at the Southeast Region Crati held in Montgomery, Alabama.

Brother Smith is a Silver Life Member and a Gold Subscribing Life Member of the NAACP and serves on NAACP National Life membership committee.

Presently, he serves as the Secretary of the Georgia State Conference NAACP.

He has served at the State level as a Political Action Chairman, District Coordinator, Voter Empowerment Chairman and Assistant Secretary. He has served as a delegate for the Augusta Branch NAACP in Washington., DC, Detroit, Mich., Cincinnati, Ohio, New City, Kansas City, Mo. and Los Angeles, Calif.

The credentials committee is responsible for resolving issues with credentials, attendance and disputes across the association during the national convention.

As Chairman of the committee, Dr. Smith was responsible for making the daily report to the convention delegates during the plenary sessions.

As a member of Omega Psi Phi Fraternity, Inc., he has represented Psi Omega at numerous events to include Conclaves in Los Angeles, and New Orleans, district meetings in Tampa, Orlando, Miami, Atlanta, and state meetings in Augusta, Valdosta, Atlanta, Marietta, Macon, to name a few. In Psi Omega, he serves as the NAACP Chairman, Newsletter Editor, Voter Empowerment Chairman and is a member of the Achievement Week Committee. Additionally, he served as KRS from 1989-1996 and Basileus of Psi Omega Chapter of Omega Psi Phi Fraternity from 1996-1999.

Additionally, he is the recipient of the Augusta Lincoln League Citizen of the Year Award for valued community service and the Lucy Craft Laney Museum of Black History Award for Social Justice for 2011, and received the Augusta City Football Classic Community Service Award. Dr. Smith is currently serving as the President of the Augusta, Georgia Branch NAACP.

He has held this position since 2003 and completing his 4th term in office. He is married to the former Susie Jones of Demopolis and have two children Charles Smith, Jr., and Yashica Charnelle Smith both of Atlanta, Georgia. Dr. Smith is the son of the late Mr. Jim Smith, Sr. and the late Mrs. Mattie Smith Wilson of Demopolis.