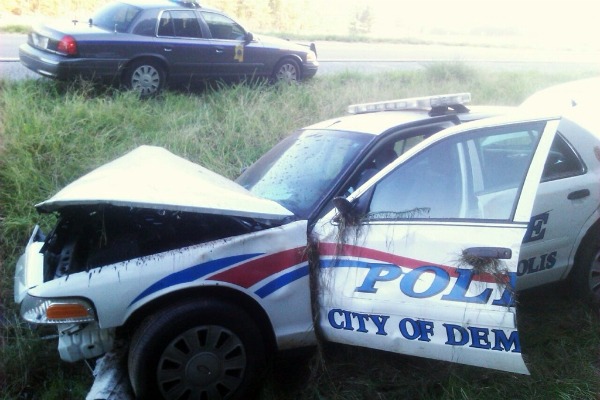 Clint Dearman, 25, was charged with Attempting to Elude an Officer and Domestic Violence III after leading police on a chase for nearly 50 miles.

Demopolis Officer Kent Ott was responding to a dispatch call when the case began.

“The officer was responding to a domestic disturbance call at Walmart,” Demopolis Police Chief Tommie Reese said. “As he approached the parking lot, the vehicle fled.”

Ott wrecked his cruiser in pursuit on Highway 45, crashing into trees along the shoulder. Ott’s injuries were not serious.

“He had some minor fractures,” Reese said. “Considering the damage done to the vehicle, he was very fortunate.”

Dearman was arrested by Clarke and Choctaw county sheriffs at approximately 6:30 p.m.

Reese said his department travelled to Mississippi Tuesday and filed additional charges against Dearman there. He also faces drug charges in Butler and other charges in both Alabama and Mississippi.