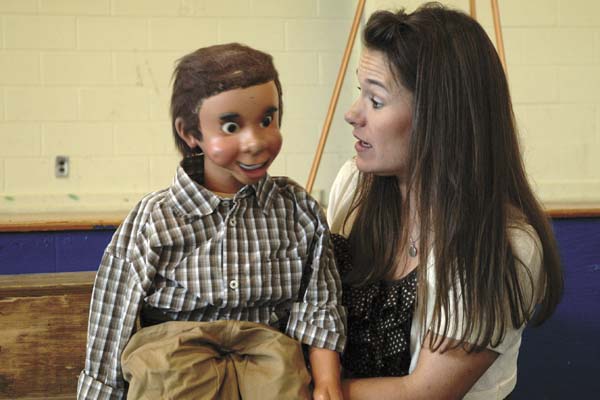 When Charlie Atchison speaks, some people listen. When Andy speaks, everybody listens.

That point was again emphasized Friday morning at John Essex School’s Grandparents Day program where Charlie and Andy taught those in attendance about what the Bible has to say regarding grandparents and the elderly.

Andy and Charlie have been friends for 19 years, a relationship that started when Charlie was 12 years old and first ventured into the realm of ventriloquism.

“My parents started doing mission work when I was little and we went to Oklahoma every year and there, at the Christian camp, was a ventriloquist and gospel magician,” Charlie said. “Really it was just the mission work with the Native Americans that got me started.”

Charlie learned tips and tricks regarding ventriloquism for a few years before becoming the voice of Andy.

“Andy has a lot of basic stories he tells like David and Goliath, Jonah and the Whale and Gideon,” Charlie said. “Andy is mischievous. It’s really his own little character we’ve created.”

Over the years, it has become difficult for Charlie to make herself part with Andy for another doll. She admits she has become so attached to him that she entertained the idea of dressing him in a tuxedo and sitting him in a chair at her wedding.

Her husband, Hank, objected to the idea. Andy stayed home.

“He is 19 years old. He really needs to be replaced. I’ve had to perform brain surgery several times,” Charlie said.

But worn out or not, Andy’s routine never gets old. He and Charlie have teamed to educate and encourage children and adults alike for nearly two decades. Now, they spend most of their efforts in Demopolis.

“The main thing I do is any kind of church function. Anything we do is always centered on the gospel and what Christ has done for us,” Charlie said. “The main thing I let people know up front is this is a ministry.”