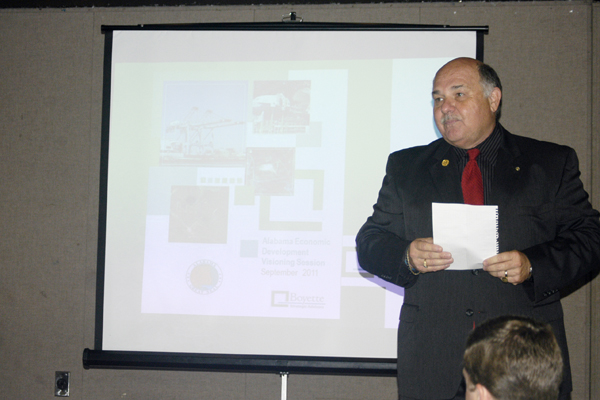 If Alabama’s Black Belt Region is going to grow, it needs to do so on the back of a well funded and strong educational system.

That was the consensus Thursday morning on the Demopolis stop of the newly formed Alabama Economic Development Alliance’s Accelerate Alabama program tour.

“You cannot show me an outstanding community with average or below average education,” said Larry Lee, former executive director of the Covington County Economic Development Commission and the West Central Partnership of Alabama. “It just doesn’t exist.”

The Demopolis Civic Center was the third of several “visioning sessions” scheduled around the state over the next several weeks. The goal of the sessions is to develop a strategic economic development plan for the state.

Tracy Sharp of Boyette Strategic Advisors led the session, detailing the four-step development process the state hopes to undertake and implement over the next several months. The visioning sessions are part of a larger process of competitive assessment for the state.

Sharp spent much of the 90 minutes listening to the suggestions of an audience of about 40 business, community and governmental leaders from around the region.

Among the most common issues expressed was the need for better education and job training, stronger infrastructure in rural communities.

“(Alabama Industrial Development Training) did a study and the results say there are 6,000 available workers in this area,” said Chuck Smith, Human Resources director at Demopolis’ RockTenn, “but there’s no training available. That labor force is, right now, either unemployed or under-employed.”

Smith noted a lack of workforce training and development as a stumbling block that hinders Alabama’s rural areas from catching up with the larger, more urban settings.

Demopolis Superintendent of Education Dr. Al Griffin said budget crunches handed down from the state have tied the hands of school systems who are constantly evaluated by test scores rather than the education that could be most suitably tailored for their students and their aptitude.

“Right now, about 20 percent of jobs require a four-year college education,” he said. “About 65 percent require some kind of tech-training. As a state, we’re failing 65-percent of our kids by not teaching them how to earn a living if they don’t go to college.”

“Everything is geared to how well you do on the (darn) test,” Lee added, “rather than if they’re prepared for a good future.”

Proper education of a workforce, Lee said, would be key to rural growth but the impact of jobs created should also be taken into account when state recruiters hit the trails in search for industry.

“One job in Demopolis is probably equal to 30 or 40 jobs in Birmingham,” he said. “At the state level, it’s all looked at as the same number. That one job would mean a lot more to a city the size of Demopolis that it would to a big city.”

“The rural areas need to have a greater voice,” Demopolis Mayor Mike Grayson added. “Our areas get overlooked the most because historically, we’ve always been overlooked.”

Aside from workforce education and leadership development, infrastructure was cited as a key need in job and economic growth.

“If you don’t have broadband – good and reliable Internet access, you’re dead in the water,” Lee said.

To close the meeting, Sharp asked the audience what they would like to see the State of Alabama accomplish by 2016 under ideal circumstances and given unlimited resources.

“According to projected growth, it will be 2025 before we get back to 2008 funding levels,” he said. “In 14 years, we have to hope we’ll be where we were three years ago…And there still won’t be enough for career education.”

At the conclusion of the 90-minute question and answer session, the tables were turned on Sharp as participants wanted assurance that their feedback would be put to good use.

“We have an implementation plan,” Sharp assured the crowd. “We’ll make sure this doesn’t sit around on a shelf.”

Sharp added that the feedback provided during each session would be compiled and likely made available to the public by January.

The Alabama Economic Development Alliance was formed in July by executive order of Gov. Robert Bentley.

More information for the sessions and an overview on the project can be found at www.acceleratealabama.com.