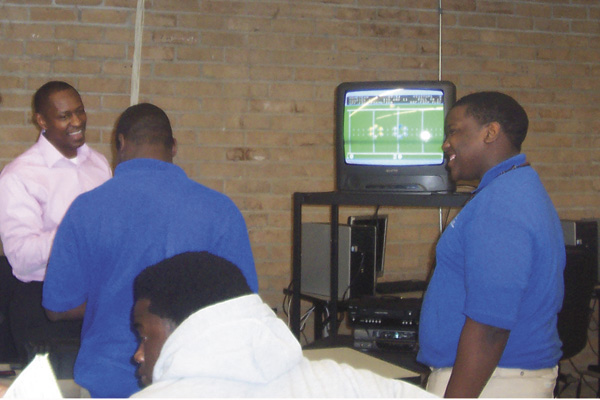 Derrick Lindsey, vice president of education for Inline Corporation, came down on an invitation from Katrina Sewell, Information Technology instructor at the technology center to talk to the students about the different careers they could pursue in technology.

Lindsey informed the students that where they are today does not necessarily mean that’s where they will be in the future.

He used himself and the path he took as an example; going from working at the ice cream parlor, washing dishes at the steak house, and playing college football at Ole Miss to finishing college and working numerous jobs in the computer technology field, and now vice president of education for Inline Corporation, one the area’s most popular technology corporations that is based in Birmingham with offices in Montgomery and Jackson, Miss.

The students also experienced the hands on transformation of technology over the years, by viewing and operating the available technology Lindsey had on display.

On-site was the Apple 2 C, one of the first computers used, old video games setups using the joystick, and then to the latest form of technology we have now, the iPad.

The students also saw the many jobs they could maintain just from majoring in technology. Lindsey stressed the importance of education and perseverance to the students.

Sewell said that she hoped the students took the information seriously and has already begun to prepare for their future whether it is entering the workforce immediately after school or attending college.

With the economy being as it is today, Sewell said, “our students need to have goals set and a sense of direction. By doing that they also need to know what resources are available for them.”