Renew Our Rivers kicks off Friday 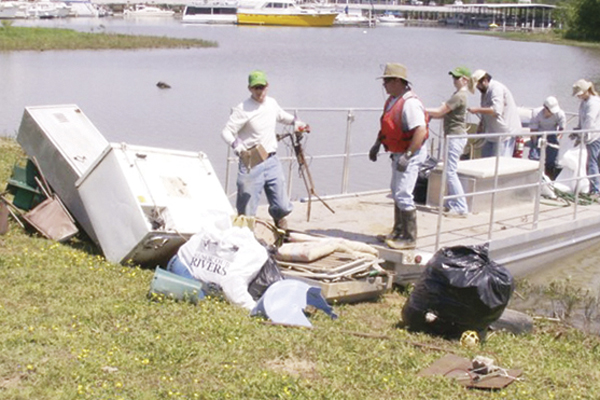 The Renew Our Rivers campaign will stop in Demopolis again beginning this Friday.

The annual program, aimed at cleaning up Alabama’s waterways has removed nearly 300,000 pounds of trash from the Demopolis waterway over the past six years.

This year, in conjunction with the effort, the Demopolis Public Works Department is offering citizens the opportunity to clean out their garages while volunteers clean out the river.

City residents who have household debris can haul it to the curb and have it picked up by the city free of charge during this campaign.

The debris, along with what is retrieved from the river, will be sorted and hauled away. Some with be hauled to Rowley Recycling.

Approximately 36 percent of what has been hauled from the water since 2005 has been recycled according to Alabama Power’s Bob McCants.

Baker, who has joined the effort each of the past six years, said the team was also in need of volunteers. Even if you don’t have a boat, you can still help.

“(Alabama Power) has the boats and barges,” he said. “If you show up down there, there will be something for you to do.”

Baker noted that the amount of trash collected from the river has gone down each year, a noticeable fruit from the organization’s labor.

“They’ve done a great job cleaning the river up,” he said. “But there’s still a lot of trash in that river.”