DCSF doles out more than $50k 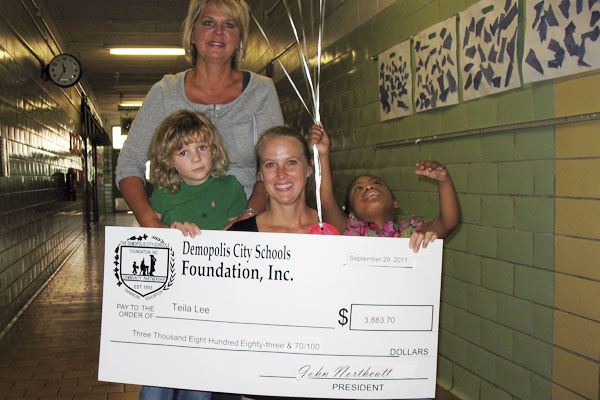 With a balloon bouquet and a giant check from the Prize Patrol, lucky Demopolis teachers received the news Thursday, September 29, that they had been awarded grants from the Demopolis City Schools Foundation.

Most of the requests this fall were for technology items to bring classrooms into the 21st Century, but other requests asked the Foundation to fund professional development, writing programs and physical education supplements.

The committee called on the expertise of the school system’s technology coordinator, Jeremiah Dial, for the cost and specifications of technology requests.

Since the Foundation’s beginning in 1993, it has awarded $856,483.26 to education professionals in the Demopolis school system for projects, programs and equipment that cannot be paid for through the system’s budget.

Grants are financed through Foundation memberships, fund-raisers and interest on investments.

• Cynthia Whitlock, “The Power of Print 2011,” $996.03 partially funded for two rolls of poster paper and one roll of laminating film.

• Cynthia Whitlock, “Technology: Keep on Rolling!,” fully funded for $6,800, for a portable set of classroom computers.

• Rachel Etheridge, “Surfing the Math Waves with the Promethean Board,” $1,958.43 fully funded for a classroom SMART Board.

• Coty Geohagan and Julie Massey, “The SMART Revolution,” $3,071.34 partially funded for a classroom SMART Board.

• Linda Edmonds, “SMARTBoards for SMARTERStudents,” $1,305.68 partially funded for a classroom SMART Board.

• Tracy Stewart, “My Laptop and ME,” $680 partially funded for a laptop computer.

• Carrie Dauphin and Gina Johnston, “Write Where You Are,” $1,420 fully funded for professional development to unify the writing program from K-12.