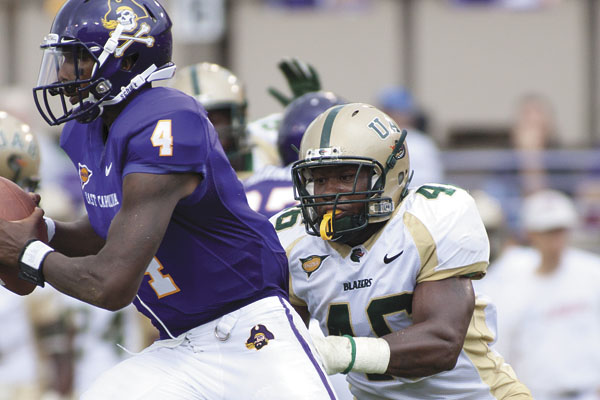 The junior linebacker, who had never recovered a fumble in his collegiate career prior to last weekend’s trip to Greenville, N.C., found himself in the right place at the right time all afternoon long.

“I guess I was lucky,” Irvin said. “But I did read my keys and it took me to the ball every single time. It was unreal.”

Irvin’s accomplishment doubled the old school record, which was held by James Lewis, who recovered two fumbles in a 1997 game against Louisiana-Lafayette. Irvin, who also recorded five tackles and a sack in the contest, skyrocketed to the national lead in fumble recoveries with his landmark day.

But while the individual achievement was notable, Irvin found it difficult to celebrate his success as his team dropped to 0-3 on the season.

“I never really thought about it. I’d never even heard of it,” Irvin said of the obscure school record.

“But it’s hard to celebrate that with the way we’re playing and our schedule and our record. It’s great to have. But I don’t really think that much about it. I want us to win.”

After his team was beaten by a combined score of 88-10 in the season’s first two games, Irvin expected East Carolina would be the breakthrough for the 2011 Blazers.

“Before we came out, we kind of took it to another level as a team. We knew we’d played pretty bad our first two games,” Irvin said.

“We came out with a different level of intensity and a different spirit. The whole preparation was different going into the ECU game.”

Irvin, who relishes his spot as a starting linebacker, will try to help get his team off the snide this week as UAB travels to face arch rival Troy.

“The first two years I played, but I didn’t have a key role as a starter, except on special teams,” Irvin said. “During offseason workouts, I said I was going to get a starting spot some way somehow. That was my goal, to contribute on the defensive side instead of just on special teams. All the work I put in is finally paying off.”