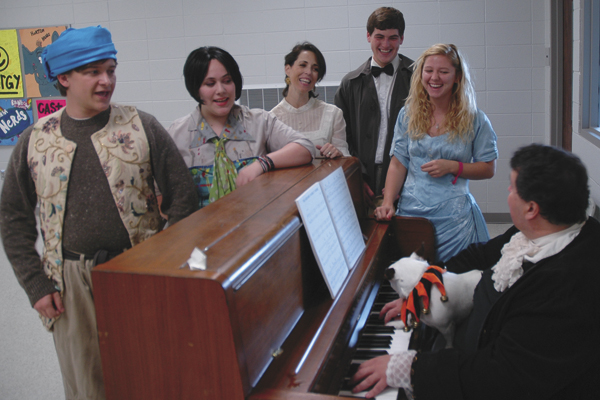 Demopolis High School drama enthusiasts will bring to life some of the eeriest songs of Broadway Tuesday, Oct. 25 when it hosts its first Haunted Broadway production.

“They are having a great time,” Demopolis High drama teacher Jody White said of the students involved in the production. “The minute we told the kids about this fundraising idea, they were all excited.”

The fundraiser will see approximately 15 students perform around a dozen song selections from a variety of hit Broadway musicals.

Song selections will come from shows such as The Phantom of the Opera, Little Shop of Horrors, The Rocky Horror Picture Show, The Addams Family and Sweeney Todd.

“We’re just piecing it together. We started thinking of songs of the top of our heads,” Brown said. “What other chance are we going to have to do pieces of Rocky Horror in Demopolis?”

“A lot of these musicals we could never produce at the high school because of various reasons,” White said. “But to be able to do a song from Rocky Horror is exciting for the kids.”

The selections will all be spooky in nature as the group looks to get its audience in the mood for Halloween.

“We’re going to have a costume contest. We want everybody to come in costume,” Brown said. “It’s a fun idea. We hope it is going to become an annual event. We are starting out small this year and we hope to just continue to get bigger and bigger and bigger.”

The event is slated to start at 7 p.m. with admission set at $5. The Tiger Arts Guild will use the proceeds from the event to help fund the production of Alice in Wonderland, which is set to open Nov. 16.

“We’re doing a really unique, artistic version of Alice in the World,” White said. “Our set is going to be far out and crazy.”