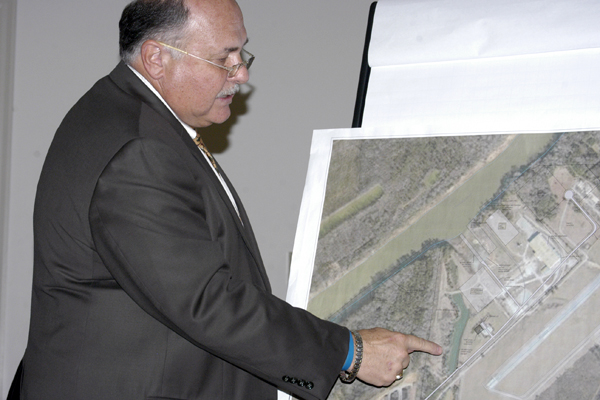 Mayor Mike Grayson looks over an aerial photo of the site for the proposed Intermodal Complex Wednesday night.

According to the the latest census information, the City of Demopolis lost nearly 60 residents.

During his town hall meeting Wednesday, Demopolis Mayor Mike Grayson said he suspected those numbers may be slightly off.

“I feel like a lot of those people didn’t move away, they just may have moved outside of the city limits,” he said.

Grayson addressed several topics in the 90 minute meeting, including bringing the population back with his “15 in 15” plan.

The plan, he said, called for a population of 15,000 residents in the city by the year 2015 – an aggressive goal considering that nearly doubles the existing head-count and reverses a migration trend.

“We can only do that by growth,” he said. “Growth in all directions. Growth in jobs, annexation, growth in industry…”

Grayson pointed to jobs, specifically jobs at the budding intermodal complex, as the key to unlocking the city’s potential.

The Intermodal Complex – loosely dubbed the Port of Demopolis – would play a large role in any exponential growth.

“Nineteen percent of the navigable waterways in the United States come through Alabama,” Grayson noted, “and Demopolis has two. Rivers these days are known as ‘marine highways’. We need to capitalize our rivers for commercial, industrial and recreational growth.”

Studies indicate the Intermodal Complex would be a $28 million project and could take 18 months to get fully operational. However, Grayson said the financial impact would be swift.

The same study estimates construction and renovations would create 566 jobs and approximately 300 direct jobs once the complex was operating at full capacity, with an average salary of more than $30,000.

“These are good and well-paying jobs,” he said.

Those expectations were tempered by an unknown timeframe to bring the complex up to meet its potential.

Grayson noted that interest in the complex from potential suitors has been high to-date, yet none have made a firm commitment.

“In fishing terminology, the cork is moving,” he said. “We’re getting bites, and bites right now are good.”