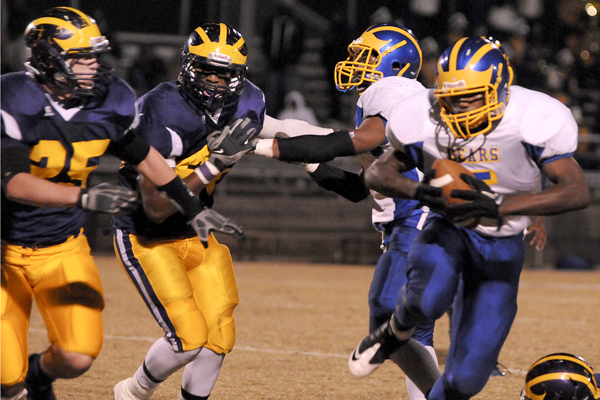 It was a tale of two halves for the Keith High School Bears Friday night. The first two quarters, the Bears played toe to toe with the Sweet Water Bulldogs. However, in the second half, the Bulldogs pulled away for the 48-26 win.

Sweet Water rolled up 387 rushing yards, anchored by 193 yards on 31 carries from Michael Thompson to wear the Bears down and advance to the next round of the Class A playoffs.

Bulldog head coach Stacy Luker said he knew his team would have to live or die by the run.

“We decided at halftime we were going to get in our tight set and run the football,” he said. “What happened was going to happen. I was proud of the way we responded.”

However, it was not an easy journey.

In the first half, the teams played dead even. The Bulldogs struck first after a Keith fumble gave them the ball at the 31-yard line. Four plays later, Thompson found the end zone from 5 yards out to make the score 6-0. Taylor Wilson added the extra point to make the score 7-0 with 9:25 remaining in the first quarter.

The Bears also got their first points off a turnover. Terrell Velazquez intercepted a Sweet Water pass and two player later, Martavius Harris found pay dirt from 8 yards out. Bobby Barnes hit the extra point to tie the game 7-7 with 5:15 to go in the opening quarter.

The Bulldogs scored their second touchdown of the half on a drive that appeared to have stalled. With fourth and 4 at the Bear 26, Thomspon broke free and carried it the distance to put the Bulldogs up 14-7 after the extra point with only 9 seconds off the clock in the second quarter.

The Bears again answered back with a 30-yard touchdown pass from Maurice Crumpton to Barnes to cap a five-play, 56-yard drive to tie the score after the extra point with 6:05 to go in the half.

Keith took its first and only lead of the night when Eric Tolbert spoiled a Bulldog drive by scooping up a fumble and rambling 75 yards for the score. The extra point failed, but with 1:33 to go in the half, it appeared the Bears would still head to the locker room with a 20-14 lead.

The Bulldogs had other plans. In the final minute of the first half, the Bulldogs took the momentum back and never looked back.

Quarterback Brett Davis controlled the ball and the clock, eventually connecting on a 32-yard pass with 3 seconds left to tie the score. The Bears blocked the extra point, leaving the teams deadlocked at the half.

Luker had a simple, but effective, message for his team at halftime.

“I told them we just didn’t need to turn the ball over and I talked about being more physical,” he said. “I told them all week I thought the more physical team would win and I had to remind them of that at halftime.”

The Bulldogs pounded away, scoring on their first possession of the second half with a 3-yard Davis run. Davis then added a 20-yard touchdown run in the fourth quarter with 10:35 to go in the game to give the Bulldogs a 34-20 lead.

Demarcus Gamble added another 9-yard score to give the Bulldogs breathing room at 41-20, before Keith showed life once again.

Charles Johnson broke free for a 68-yard Keith score with 6:36 to go to bring Keith to within a 41-26 score. But it was too little too late.

Despite the loss, Bears head coach Harry Crum said he was pleased with his team’s effort.

“They never quit and we have a good group coming back next year,” he said. “We are going to miss the seniors we lost, but we will be back.”