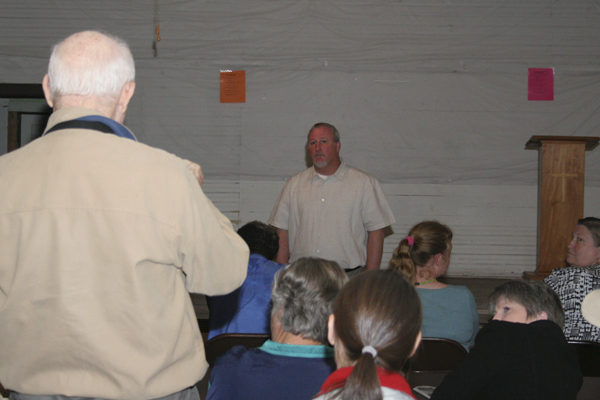 Clarence Simmons, Jr. of Jefferson, whose family has received mail at Jefferson Post Office since its opening in 1848 speaks to Greg Conner, manager for post office operations for the area that includes Jefferson.

JEFFERSON – Jefferson residents gathered Wednesday night to learn the status of its post office from U.S. Postal Service representatives. Most are not satisfied with the response they received. Still, residents remain hopeful that surveys, letters and petitions will help keep the office open.

Greg Conner, manager for post office operations for the area that includes Jefferson, led the discussion among 50 community members. Conner explained the financial status of the postal service, which he said is the reason that local offices have been tabbed for potential closure.

“The United States Postal Service’s financial picture is challenging at best. Projections are bleak. If something doesn’t change soon, the USPS may not make payroll by the end of November,” Conner said.

In recent months, 1,500 USPS jobs have been cut, and 350 more will be axed in the next two months. The USPS employs more than 570,000 people, third only to Walmart and the U.S. Department of Defense. Its only income is customer sales, Conner said.

Considering a service that relies solely on customers, Jefferson community members said they do not see the USPS offering reasonable compromises for them to continue to support the service. Offers include rural delivery to those who do not currently receive it because they live off the beaten path, but only to mailboxes placed no more than half a mile off the current route.

“But I live eight miles down a dirt road, how can I think my packages are safe in a box so far from my house?” asked Craig LeBoeuf, who relies on the Jefferson Post Office for his mail.

“Who can stand at a mailbox and wait on a carrier to bring supplies? What about our money orders? Who wants to put $600 cash in a roadside mailbox?” asked Linda Chaney. The concern for theft was echoed by several, including Betty Bates, who said that many residents are “scared to have their checks sit in a mailbox, especially at the first of the month.”

Conner’s solution, “get a post office box in Demopolis or Linden.” But a 15-plus mile drive to town each day or a few times a week is not an option for many Jefferson residents who are elderly or do not have transportation.

Conner countered the safety concern by explaining that first and third of the month checks would soon be required to have direct deposit.

This change, he said, will be a tremendous blow to the USPS, causing its mail volume to fall again.

As bill pay, bank statements, and other frequent activities move away from the USPS, the service continues to lose revenues.

In fact, the other two comparable drops in mail volume are the Anthrax scare nearly a decade ago and 9/11. “If the USPS would focus on the basics again,” Bates said, “such shutdowns might not be as widespread.” Still, officials say, the greatest threat to the USPS is the Internet.

“Not here,” said resident Virginia Norman, “we don’t have the infrastructure for reliable Internet service.”

As it turns out, Jefferson residents who use the Internet for purchasing stamps or other supplies is more than likely giving their credit to the Demopolis office. Credit is given to the ZIP code on the billing address of the credit or debit card used, and as one resident pointed out, most Jefferson residents are required to use the Demopolis ZIP code because mail is distributed according to E-911 addresses.

The threat of its post office closing is disheartening to the Jefferson community because of the services that residents have come to rely upon for many years. All agree, “It’s about service.”

“Our post office has been in operation since 1848. Benjamin Franklin didn’t design the U.S. Postal Service as a profiteer, but as a service to the people,” said Lucretia Norris, one of only two postmasters who have served in the office over the last 57 years. Now retired, Norris passed her duties to Patsy Rogers nearly 20 years ago.

Sylvester Daniels, a lifetime resident of Jefferson, asked if rental rates on post office boxes could help bring in revenue. The construction and installation, Conner said, would not be worth the small return.

“It sounds like the decision is made, then,” Daniels said.

Conner assured Jefferson residents that no decision has been made and that everyone should write letters and complete surveys to have their voices heard. A petition is available at Compton’s Grocery in Jefferson for residents to sign in favor of saving the post office.

All surveys and the petition must be postmarked by Nov. 9.