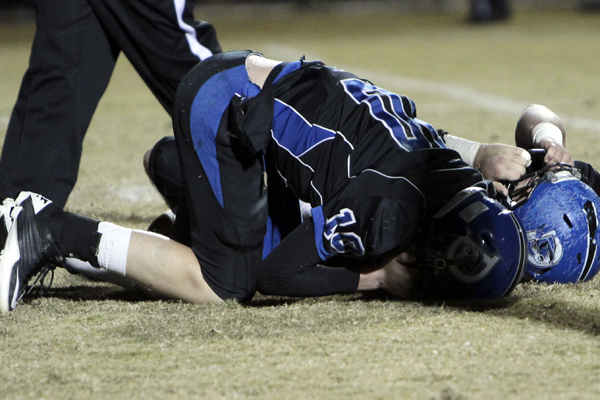 Michael Clements - For the Times

Demopolis (6-5) saw its season come to an end on a Charles Henderson (6-5) fumble recovery in overtime Friday night as the Tigers fell 21-14.

The play came one snap after Trojan running back Courtney Downing punched the ball in from a yard out to complete Charles Henderson’s comeback from a 14-point deficit.

“You played your butt off. You did everything we asked you to do,” Demopolis head coach Tom Causey told his players following the game.

The touchdown came after Charles Henderson quarterback John Bradley scored on a quarterback sneak from a yard out to cut the DHS lead to 14-12. Bradley then popped out from under center and found Brandon Gosha for the two-point conversion pass to tie the game with five minutes to play in the fourth quarter.

Demopolis forced a Charles Henderson turnover on downs with 18.9 seconds remaining in the fourth and drove the ball down to the CHHS 34 before missing a 51-yard field goal on the final play of regulation to send the game to overtime.

The Tigers got the help of a CHHS holding penalty to avoid a 68-yard scoring run by Downing on the first play from scrimmage before digging in to halt an 11-play drive when Demetrius Kemp sacked Bradley on fourth down.

Demopolis then drove the ball down to the CHHS 7 before the Trojans recovered the first of four Tiger fumbles.

The DHS defense held strong again, forcing a Henderson punt that was blocked by Pierre Thomas on the final play of the first quarter. Kemp caught the deflected punt in the air and returned it 18 yards to give Demopolis the early lead.

Demopolis added to its lead with 5:40 to play in the second quarter when Tyler Oates found Kemp for a 13-yard touchdown pass. Mitch McPherson’s extra point stretched the advantage to 14-0.

The Tigers received the opening kick of the second half and took the ball 22 yards on two plays before committing their third turnover of the evening. Demopolis would go on to muster only 39 more yards on 13 snaps in the remainder of regulation, gaining 26 of those yards on the final two plays before the missed field goal attempt.

“We just didn’t make plays in the second half and we had way too many turnovers,” Causey said.

While Demopolis ran only 16 offensive plays after halftime, Henderson dominated the ball by running 39 plays between the opening kick of the third quarter and Downing’s game-ending touchdown run.

James Wilson led Demopolis with 67 yards on 12 carries. Kemp added 47 yards on four rushes and 31 yards on two catches. Jerry Campbell finished with 88 yards from scrimmage in his final game as a Demopolis Tiger.