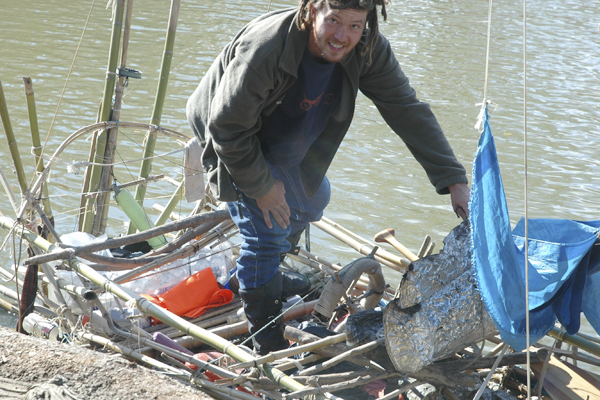 The talk of the campground at Foscue Park last Friday was a man known as “Zeru” and his makeshift sailboat.

Originally from Illinois, Zeru, whose given name is Zachary Aldeguer, pulled his homemade sailboat off the Black Warrior and into Foscue Friday afternoon, some eight weeks after departing from Tuscaloosa.

“It’s been about a month and a half,” Aldeguer said. “I’ve been fighting headwinds and reverse currents. It has been flowing upstream.”

Aldeguer fashioned the frame of the sailboat out of bamboo and a ballast of plastic bottles filled with mud.

The vessel contains a space big enough for him to set up his tent and keep warm in the evening hours.

Since leaving Tuscaloosa, he has added a yoke and made other modifications to enhance the vessel’s durability and maneuverability. An on-board grill serves as a galley.

Aldeguer, 30, has spent most of his adult life moving around. Whether hitchhiking or floating down the river, Aldeguer has made a life out of living.

“I’ve spent a couple years hitchhiking the U.S. I’d get a job and spend a couple years getting on my feet again and either something would happen or I would get the itch to just move again,” Aldeguer said.

“I saw the river. I said, ‘I’m just going to build a boat.’ It was really just to get a better idea for how I want to build it later.”

Aldeguer has been on the river since the end of August. His hope is to ultimately end up in Mobile.

“I guess I’m just going with the wind,” he said. “I sailed a boat before. So I just put it together in my head and just built it. I’ve been wanting a boat for about 10 years.”

As it makes its trek down the river, Aldeguer’s vessel flies four small flags, telling onlookers of the things he finds important.

The American flag sits atop the quartet, followed by a homemade State of Alabama flag, a flag depicting Jesus Christ and another paying tribute to Kingdom Hearts, Aldeguer’s favorite video game.

After a brief stay at Foscue, he returned to the water and continued his journey toward Mobile, a place that will also likely prove to be less of a journey and more of a layover for Aldeguer.

“Supposedly it is supposed to be smooth sailing from here on,” Aldeguer said.