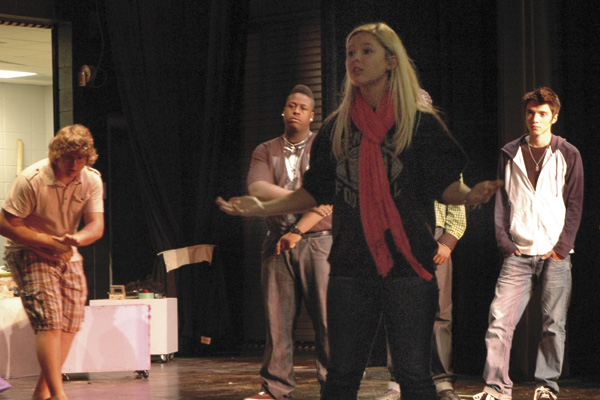 The Tiger Arts Guild will unveil its latest production next week when approximately two dozen Demopolis High School students take to the stage for Alice in Wonderland.

“I think they’ve all wanted to do Alice in Wonderland for a really long time,” Demopolis High School drama director Jody White said, “but we haven’t felt like we’ve had the capacity for the set we wanted to do.”

The group began practice for the fall production in early October, sandwiching preparation around a Halloween-themed Haunted Broadway fundraiser that allowed the guild to obtain funds toward the production costs of Alice in Wonderland.

“The set is going to be just amazing,” White said. “We’ve had so many students that have been working on this during their art electives. The focal point of our set is going to be this amazing tree. I think the students have had just as much getting the set ready as they have rehearsing.”

While the set itself figures to be impressive, Alice in Wonderland will feature the unique element of allowing the audience to see set changes.

“A big part I wanted to incorporate was allowing the audience to see the magic happen,” White said. “A lot of our stuff has that foldable, pop-up, interchangeable quality.”

The group has enlisted the help of Joey Lay and Garland Farwell in the design of the set, relying on a grant to fund the assistance from the theater professionals.

The production itself is part play and part musical as students will work to bring to life both the dialogue and music of Wonderland.

“Although this is not what I would call a full-fledged musical, I was not able to find a version of Alice in Wonderland that I liked that didn’t have a little music,” White said.

Mary Morgan Tucker will play the lead role of Alice while Alex Poole serves as her understudy.

Douglas Purcell will portray The White Rabbit. Jack Key will be the Caterpillar. Miguel Lopez and Mario Garner will play Tweedle Dee and Tweedle Dum. Other notable characters include Baba Smith’s portrayal of Mad Hatter, Jack Key’s rendition of the King and Queen of Hearts as portrayed by Sydney Hill.

“We’re doing a matinee for some of the school children in the city Wednesday,” White said.