Linden youth have faith in one another 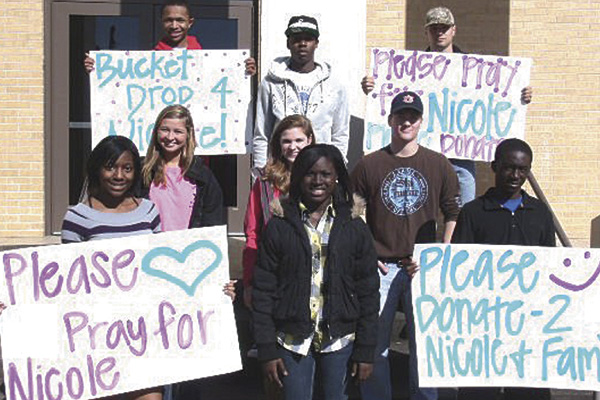 LINDEN — Amid all the chatter surrounding the separation of the city’s high school football team from its longtime home at Linden Athletic Field, the plight of Marengo Academy senior Nicole Langley has gone largely unnoticed during a tumultuous semester in the community.

The tenuous relationship between the Linden City Board of Education and the Linden Athletic Association has prompted a number of outsiders to assume a certain level of racial unrest in the city with the dichotomy of the largely black Linden City Schools and the predominantly white Marengo Academy adding fuel to incendiary finger pointers.

A group of 16 of the city’s young people showed last Saturday that race plays no role in their decision-making when the Linden Youth Advisors used Langley’s struggles as a rallying point in a city thought by some to be divide along racial lines.

“I’ve never seen her a day in my life, but I didn’t mind going out there and spending the day to help her,” Linden High School senior Wilvonta Horton said of the Youth Advisors’ project to help Langley, who was admitted to the hospital at UAB on Sept. 28 with complications from Staph infection. Just three days later, Langley moved to the intensive care unit, where she has remained since.

Horton was part of a Linden Youth Advisors team that hit the streets last Saturday to do a bucket drop in an effort to raise funds for Langley’s medical bills.

“I knew that it was something that all the kids would be interested in because a couple of our kids have class with Nicole at (Marengo County Technology Center),” Youth Advisors sponsor Mitzi Gates said. “I just proposed it to the two senior girls, one from Marengo and one from Linden High School, and they both thought it was a great idea.”

The effort raised $834.46 for Langley. But it also raised at least a little bit of awareness that the city is not split based on skin color the way some would portray it to be.

“They have loved coming together and raising money for a common goal. I think the first time was for Haiti relief. That is something they were doing separately at both schools,” Gates said of the Youth Advisors’ efforts over the group’s few years in existence.

Founded in 2006, the Youth Advisors bring eight students from Linden High School with eight of their counterparts from Marengo Academy for a variety of efforts.

“Their time is at a premium, so it is difficult to get each other together even as much as I’d like. One of the things they enjoy doing when they get together is give updates on what is going on at their schools. They enjoy giving updates on sports and academics and extracurricular things that are going on,” Gates said. “They always wish each other all the best, particularly in sports. They want to know what’s going on with each other.”

Gates’ description is in stark contrast to the picture painted by some in which the students of Marengo Academy and students of Linden High School have little to do with one another. But accounts of Linden seniors from years gone by leaving Marengo Academy football players notes at Linden Athletic Field that read “Good luck Longhorns” sketch an entirely different image of the city’s youth and their relationships to one another.

“To be honest, I don’t see why we don’t go to the same school. We’re all the same age. We all like the same stuff. We talk, chill, have a good time,” Horton said of the group.

The Youth Advisors participate annually in a fundraiser for Relay for Life in which they play a softball game against members of the Linden Police Department.

“They came up with the Relay for Life and doing the Youth Advisors against the Linden Police Department. That has been a great success,” Gates said. “Most of the time, we do a Youth Advisor float (in the ChiLLy Fest parade). They have worked on that together. They don’t always get to all ride on it because some of them are cheerleaders and some of them are doing other things in the parade. We have toyed with the idea of doing a Youth Advisor chilly cooking team.”

The $834 dollars raised will help, but Nicole Langley has a long way to go to be out of the woods. And 16 young people can scarcely change the minds of stubborn adults. But, in both cases, the Linden Youth Advisors have done what they can do to affect change and help bring healing where it is needed most.