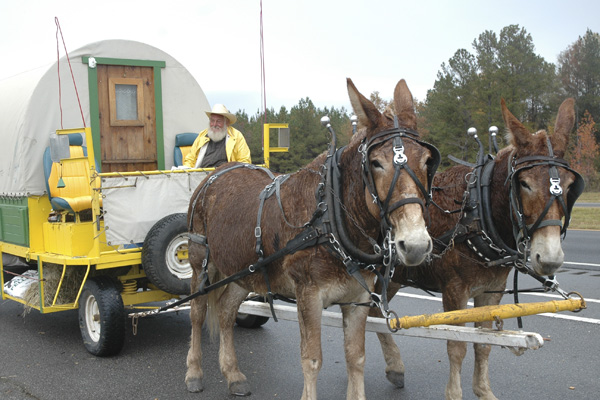 Gene Glasscock is no stranger to the road. A Texas native, Glasscock traveled countless miles in unusual fashions.

Glasscock saddled up his Quarter Horse, Cactus, in the 1980s and rode the animal from the Arctic Circle in Canada to the Equator in Ecuador. The journey was some 12,000 miles.

In 2002, he jumped back in the saddle again and rode more than 20,000 miles, visiting every capitol in the 48 mainland United States.

Earlier this week, he spent time in Demopolis. This particular journey saw Glasscock come over the crest of Rooster Bridge in the mule-drawn wagon he has called home for more than a year.

“Usually I try to go about 10 to 12 miles,” Glasscock said of the journey that started in San Diego, Calif. “Today, I came from Walker Road, which is getting close to 15.”

This leg of Glasscock’s journey began Sept. 7 in Arkansas after a lengthy stay to avoid the heat.

“I’ve rode into all sorts of places,” Glasscock said. “I crossed into Mississippi on Oct. 11 at Greenville. (Tuesday), I got into Alabama.”

Glasscock, whose current trek was delayed due to a bout with West Nile Virus, has met more notable and impressive people during his travels than he can readily recall.

“You never know who you’re going to be with,” he said. “I’ve met an awful lot of governors and first ladies.”

While this trip has had its share of friendly faces and good samaritans willing to assist the sojourner, Glasscock has spent most of the odyssey with Kitty and Kate, the mules who power his daily drive.

“They’re good companions,” Glasscock said. “I miss my dog a lot. She got killed the day I crossed into Mississippi. She had been with me the whole time.”

The wagon is Glasscock’s vehicle by day and his shelter by night. It is equipped with all the amenities he desires.

“I’ve got bunk beds. It’ll sleep three if one of them is a small person,” he said. “I’ve got a stove in there. I’ve got a solar panel on here. I’ve got a computer in there and a cell phone. I’m about as comfortable as you could be any place. I just don’t have as much room.”

The ultimate destination is still a good way down the road. Although, Glasscock is reserved about giving the reason for the final stop on the trip.