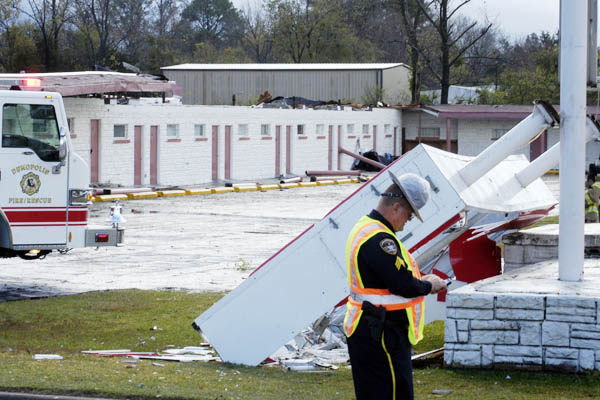 Several power poles along Jefferson Road were snapped with some property damage reported once a storm from rolled through the area at approximately 7:45 this morning. Alabama Power spokesman Freddy Padilla said seven poles were broken due to straight line winds and crews quickly worked to restore power to customers.

“I was coming up Rangeline Road (about 7:30 a.m.) and it looks like it came up right behind me,” said Jim Parr, whose family owns an operates a chain of Chevron stations across Demopolis.

One of Parr’s stores on Highway 80 East remains largely untouched. However, the scene across the street – less than a hundred yards away – is much different.

The most significant damage appears to be at the Heritage Inn where the sign was snapped from the pole and a portion of its roof blown in. Demopolis Chief of Police Tommie Reese said nine people were registered tenants at the motel at the time of the storm and none were injured.

A sign at Windham Chevrolet was blown off of its pole and a pontoon boat near its parking lot was flipped over. The most significant damage at the car lot came from the roof of Gibson Body Shop, which was ripped from the building and pieces of it came to rest on top of and against several automobiles.

Portions of the roof at the Central Alabama Farmer’s Co-Op were also blown off.

No injuries have been reported as a result of the storm.

Demopolis Fire Chief Ronnie Few said several of his firefighters were responding to an EMS call and drove unknowingly right into the chaos unfolding on Highway 80 East.

“The winds were so bad that they parked the truck and engaged the air breaks,” he said. “The watched the pontoon boat roll down the road and saw the roof blow off the Heritage Inn. The driver said the winds were so strong that it actually moved the fire truck a few inches from where it was parked.”

An official with the National Weather Service in Birmingham said the organization would work to determine if the damage was the result of a brief and small tornado or was due to powerful winds. 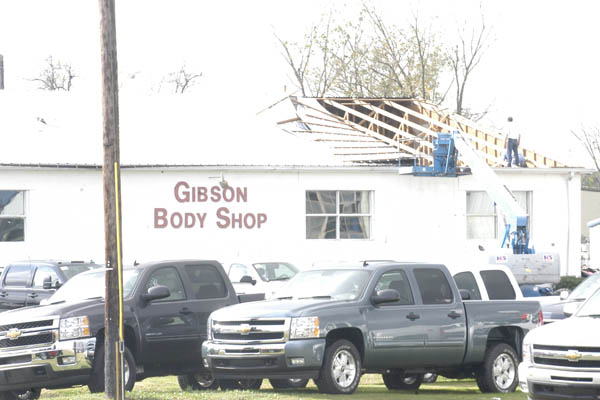