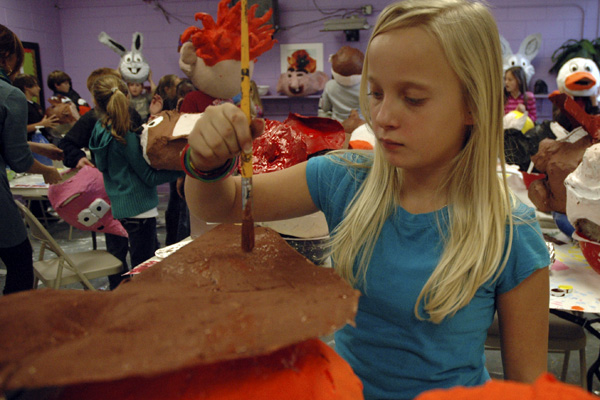 Old becomes new again this Christmas on the River as a longtime tradition that has gone by the wayside will make its grand reappearance in Saturday’s Children’s Parade.

The revitalization of that tradition has seen months of work from the enrichment classes at U.S. Jones Elementary as 43 students have worked to mold and paint paper-mache heads of some of their favorite cartoon characters. The students will get to wear those cartoon heads in the parade Saturday.

“But the heads started about 25 years ago.”

“It has been so long that it is going to be new again,” Stephanie Polk, a U.S. Jones 5th grade enrichment teacher who has also worked on the project, said.

The characters chosen by the students range from Nickelodeon favorites such as Jimmy Neutron, Timmy Turner and Spongebob Squarepants to Looney Tunes icons like Bugs Bunny, Daffy Duck, Tweety Bird and Speedy Gonzales.

“They picked the characters and provided a picture,” Hill said. “Really, the first few weeks they just tried to mold it. Then, once they got the shape, they paper-mached over it.”

The project was made possible by a Blackbelt Arts Grant and the entire endeavor has cost only about $500.

“They’ve learned how to be creative with almost nothing,” Hill said. “Just kind of using whatever we could find.”

While the project has not had many resources at its disposal, it is a venture that has captured the imagination of the children involved. As such, it promises to provide one of the most memorable moments of COTR’s 40th year.

“A couple of our people are going to be on floats, so I think we’re going to have 40 (marching in the parade), which is complete coincidence with it being the 40th year,” Hill said. “I do think we’ll be the highlight.”

“We’re going to save the best for last,” Polk added.