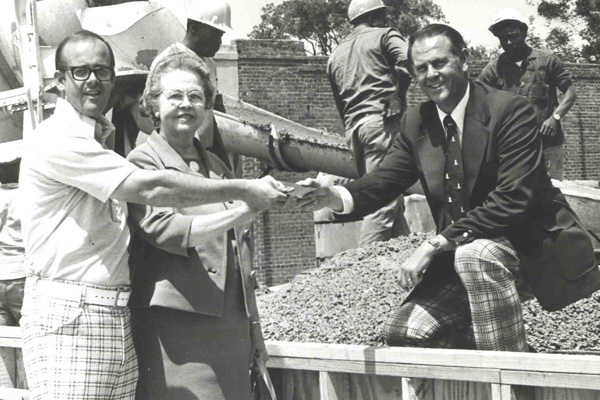 It has been 16 years since A.G. Westbrook rode off into the sunset of retirement. Still his contributions to the well-being and advancement of BankTrust in Demopolis continue to be seen even today.

As the folks at Demopolis’ two BankTrust locations celebrate the 100th anniversary of the bank, a great deal of the credit for carrying the financial entity this far can be given to Westbrook. Under his leadership, what was formerly Commercial National Bank, strengthened itself by merging with BankTrust. The move was a precursor to the establishment of BankTrust as one of the strongest financial institutions in Demopolis.

“It was Commercial National Bank from 1911 until we merged with BankTrust,” Westbrook said. He cannot remember the year exactly, but supposes it was around 1993.

Westbrook had left his role as the bank’s president by that time, but continued as the chairman of the board through the merger and up until his retirement in 1995.

While there were some minor changes that accompanied the transition, Westbrook understood that the biggest impact came in what had been Commercial National Bank becoming much stronger.

“We continued to try to serve our local community in the same way,” Westbrook said. “We felt like we were acquiring strength in the financial world of Alabama because (BankTrust) had branches throughout that state and we were adding to that strength.”

The move was one of the biggest of Westbrook’s career with the former Commercial National Bank, which began in 1968.

“Prior to that I was the personnel manager at Vanity Fair. I went into banking in ‘68 and they made me president in early ‘69,” Westbrook recalled.

He remained as president of the institution until 1992. During his 22 years as president, Westbrook oversaw the relocation of the bank’s main Demopolis branch and the establishment of a new one on the east side of the city.

“When I joined the bank, our main office was on Walnut Street,” Westbrook said. “We built the existing main office in 1975 and moved all the operation over there. And then, seven years later, we built and established that branch out on Highway 80.”

Out of banking for well over a decade, Westbrook has continued to be impressed with the work of BankTrust within the city and statewide.

“I think I’ve been impressed with the way they established branches throughout the state,” Westbrook said. “I was completely satisfied because when I joined the bank we had deposits of about $6 million and it is about $82 million today. So I think we have had a gradual but continued growth here in Demopolis. I think we have been able to serve our local people as well as anybody and better than some.”