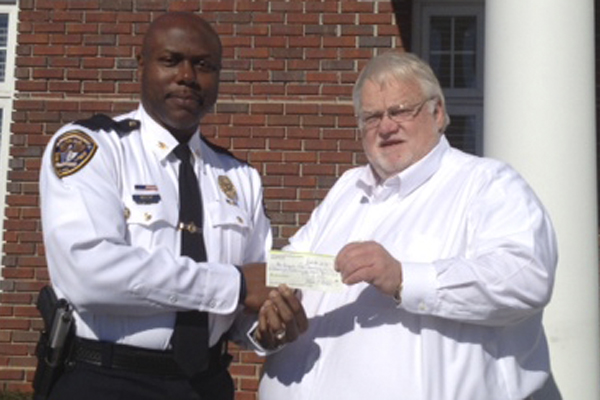 For more than a year, local residents have enrolled in the Demopolis Police Department’s Citizen’s Police Academy (CPA) with hopes of giving back to their community.

Tuesday, the graduates of the eight week program gave back to the department itself.

Through fundraisers held spanning December 2010 to December 2011, the CPA Alumni Association raised more than $1,500. Yesterday, 2010 vice-president Mike Evans presented Chief of Police Tommie Reese with a check for $1,550 – the fruits of a year’s worth of fundraising efforts.

“That’s mostly what the (Alumni Association) is for,” Evans said, “to support the police department and the CPA classes. The money we can raise allows the department to put their money to use on other things they need.”

The money, Reese said, would be used to purchase an overhead projector for the department’s training room, which serves as a classroom for the CPA enrollees.

A date for the first CPA class of 2012 has not been set but Reese expects it to begin in March.