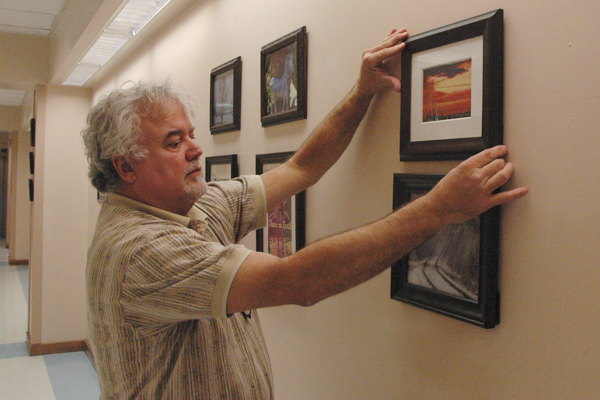 Three decades after picking up an affinity for photography, Charlie Partridge still remembers vividly what pushed him toward the art in the first place.

“When I came to work at the Demopolis Times in the early 80s, Don Fleming inspired me to get into photography,” Partridge recalled. “I consider Don Fleming the most intelligent man I have ever met. He probably forgot more about photography than I ever knew.”

Partridge began to dabble in the art 30 years ago. But photography took on a whole new meaning for him earlier this decade as his perspective on life changed.

“In 04, I had colon cancer,” Partridge said. “I lost interest in some things but gained a whole lot more in photography. That kind of filled a void in my life.”

The fruits of Partridge’s artistic endeavors are now on display at Bryan W. Whitfield Memorial Hospital as part of the institution’s contribution to the local arts, an initiative known at The Exhibit.

Partridge’s pictures will grace the front hallway of BWWMH for the next three months, offering snapshots of life in an around Marengo County over the last 30 years.

“I like to get out early in the morning and just go looking for a sunrise,” Partridge said. “I like foggy mornings. It is very hard to find fog in downtown Demopolis. And snow, obviously, I consider that a photo op because it is so rare around here.”

One of Partridge’s favorite shots in his collection came on a snowy morning just a few years ago. Partridge took the rare occasion to see what the historic St. Andrew’s Church in Gallion might look like covered in the white trim of a snowfall.

“I used to be a night person,” he said of how photography has changed his habits over the years. “Now it is totally different.”

Partridge’s gallery ranges from scenic snapshots to sunrises to wildlife, offering a wide array of images to passersby.

“I just enjoy getting out and talking pictures,” he said. “It has been an evolving process.”

Many of Partridge’s images were happenstance shots that occurred by virtue of the fact that his camera was with him when an opportune moment presented itself. One such shot features an osprey with a catfish clutched in its talons. Others are of baby birds begging their mother for food, bucks grazing in the field and dawn reflecting off the water as it breaks.

“You just don’t ever know what you are going to get,” Partridge said of the daily moments life presents to those who would attempt to document its happenings in photos.

The Exhibit offers Partridge something unique, an opportunity to show any who may be interested just how some of life’s most picturesque moments have looked over the last few decades through the lens of his camera.

“I’m just proud that they have selected me to exhibit,” Partridge said. “I consider it to be quite an honor.”