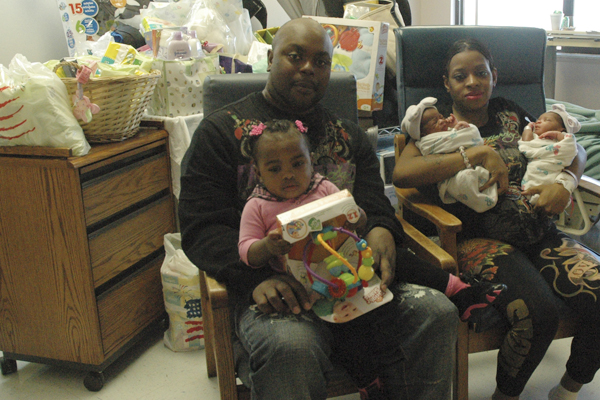 Her sister was not far behind as Adrielle Chardonnay Banks greeted delivery room staff at 10:59 a.m., measuring 17.25 inches and four pounds and 12 ounces.

“It was a big experience,” April said of learning of her pregnancy just months after giving birth to Adrielle. “It was exciting knowing I was pregnant again, especially with twins. I already had two sets of twins in my family.”

“I was excited because I always wanted a twin brother when I was coming up,” Gunthur, April’s husband and the twins’ father, said.

The Banks family now returns to Uniontown, readying for the tiring but joy-filled road ahead. Fortunately, the couple has plenty of support as it readies to raise three young girls.

“I’ve got a lot of support,” April said. “I’ve got my friend that is like a sister to me. I’ve got my mom and my brother.” Additionally, they will have the love and support of Gunthur’s parents and his older brother.

And, to get them started off on the right foot, the Tombigbee Healthcare Authority presented them with plenty of gifts donated by 70 businesses in the Demopolis, Greensboro and nearby communities.

“It’s going to be a big help, a big blessing” Gunthur said of the contribution, which the couple received by having the first babies born at BWWMH in 2012.

But neither mom nor dad needed many words to explain their collective vision for further family growth.