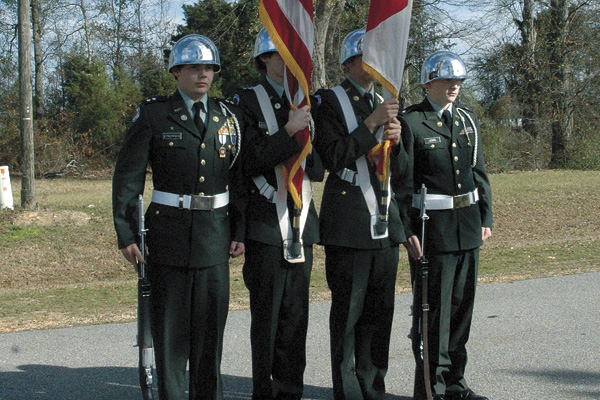 Since its inception in 1996, the Demopolis High School Junior Reserve Officers Training Corps (JROTC) program has benefited countless students are their way to adulthood.

The program, which helps build the character of and establish discipline in young people, has evolved over its 15-plus-year run to include a number of projects designed to help instill a sense of civic responsibility.

“The focus is to make them better citizens,” Sgt. Mike Black, instructor for the DHS JROTC said. “The main thing we try to present is leadership. We try to get them out of a shell. A lot of young people who come into JROTC do so because nothing else in the school fits them.”

In fitting with JROTC, 103 students in the program this year have been afforded the opportunity to provide color guard, honor guard and drill team services for community activities. Additionally, the JROTC of Demopolis High participates in an adopt-a-mile program as well as maintaining a physical team, beginning rifle team, academic team and community program team.

“This year we have presented the colors at the opening day of school for the entire Demopolis City School System, at two University of West Alabama football games, five Demopolis High School football games, three church programs and one for the ladies beautification program,” Black said.

The JROTC also set up barricades in downtown Demopolis for the Christmas on the River Parade before participating in the night parade. And members of the group have stayed after hours following every Demopolis High home basketball this year to clean up the gym.

But, as impressive as the group’s participation and involvement is, the real tell of the Demopolis JROTC’s impact is scattered around the world.

“At one time, we had 13 former cadets that were either in Afghanistan or Iraq,” Black, who has been with the program for more than 11 years, said. “I’ve got them everywhere from Fort Hood, Texas to California. They’ve enlisted in the Army, the Marines, the Air Force, the Navy.”

The sense of belonging and characteristics of leadership imbedded in JROTC cadets has frequently carried over to military careers following high school. But Black pointed out that he is cautious not to push students toward military service.

“We try not to make their decisions for them,” Black said. “If they want to go into the military, we will get a hold of recruiters.”

As the program has grown, it has required that the Demopolis City School system find some assistance for Black, which led to the hiring of Drummond late last summer.

“It has grown. We’re getting better cadets,” Black said. “There is a lot more improving to do. Eight out of 11 years (at DHS) I’ve been by myself. That has been hard on the cadets. Hopefully, now that we’ve got Major Drummond here, he’ll stay.”

“I’ve got three kids myself,” Drummond said. “So I’ve been around teenagers for quite a while.”

The move got Drummond involved with a JROTC program for the first time, but his approach fits right in line with what Black aims to accomplish with the initiative.

“Basically, just trying to be a positive influence. That’s what they need,” Drummond said.

That influence is showing itself in various ways throughout Demopolis High School, the surrounding community and the world over.

Perhaps more importantly, that influence manifests itself continually in the lives of numerous young people who have found a place to fit.