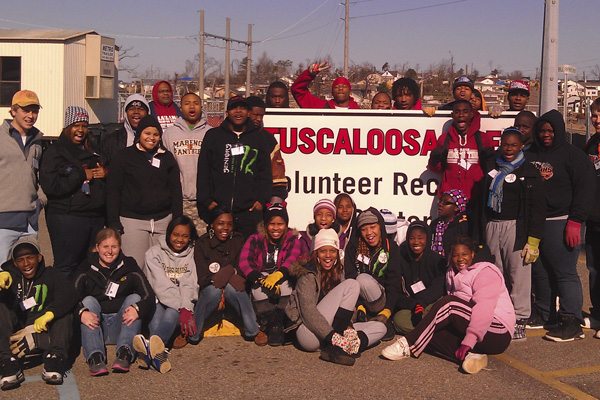 The group, along with five chaperones, donated their Saturday to individuals near Tuscaloosa who are still reeling from the tornadoes that ripped through the area last April.

“That is my first time going up since the tornadoes,” MHS senior Patrick Hildreth said. “I didn’t realize everything was still torn up as bad as it was. I felt bad for the people up there. Some lost everything. It is hard for them to try to regenerate all that.”

Working primarily in Alberta, the group spent much of its day clearing fallen timber and cleaning the properties that have remain largely untouched over the last nine months.

“Before going up there, we thought we were just going to see trash and everything on the ground,” senior Tiana Smith said. “When we got there, we saw houses basically on the ground. The sight was like nothing I’d ever seen before. It was a bad sight.”

The endeavor is part of a project that has gotten Marengo High students involved in a variety of service projects in view of character and leadership development.

“We’ve been doing stuff throughout the year in the community,” Marengo High teacher Caleb Churchill said. “This is part of what we call our Service as Leadership project.”

“We wanted to make sure the people here were taken care of first in our county,” Churchill said. “But we felt like this was an opportunity for our kids to get out and see other areas. It was an eye-opening experience for us.”

While each student has been impacted in a unique way, there are certain universal truths Churchill believes have been discovered over the course of the campaign.

“One of the things, especially with the tornado project, I think they realized how blessed they are,” Churchill said. “It helped them to see they have the ability to make an impact in their community and their state.”

The scheduling of the tornado relief project was no coincidence as Churchill and his fellow organizers selected seized an opportunity to utilize the backdrop of Martin Luther King Day as an opportunity to underscore the ideals of the initiative.

“We have really tried to drive home this idea that greatness comes through service to others, which is an idea you see in the Bible through Christ, but we also see it in Martin Luther King,” Churchill said.

“When the thought of it came up, I was kind of shaky from it, not knowing what to expect,” Hildreth recalled. “When you start doing it, you feel good, knowing you can make a difference in other people’s lives.”

In the short time since the group worked in Alberta, opportunities have arisen for service in Dixon’s Mills as students have lost loved ones for various reasons. Additionally, recent house fires have claimed the homes of some in the area.

“Since this past trip, we’ve had two people in our community whose houses burned down,” Churchill said. “This Saturday, we are getting the kids and taking food to various families in the community that are hurting.”

But, inasmuch as the students participating in the project have found a way to help others, the greatest changes may be found in the students themselves.

“It has been a huge impact. Before, our school had never gotten together to do anything like this,” Smith said. “When Mr. Churchill told us we were going to be cooking, a lot more kids volunteered. They had seen pictures of us helping. It made them want to go out and help too.”

“I think the kids have really learned the satisfaction of learning to live for other people. For many of these kids, they have found real joy in helping others,” Churchill said. “That has been the most exciting thing to me is seeing young people who have needs of their own give of themselves. I do think it has had an impact on some of their attitudes. I think many of them were changed by the experience.”