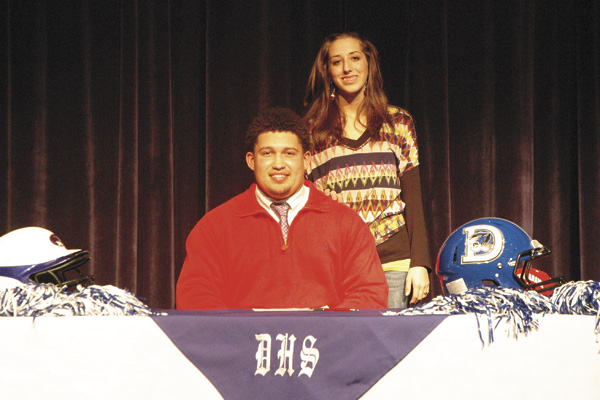 Bozeman, who was honored as part of Demopolis High School’s National Signing Day ceremonies Wednesday, is the first DHS softball to sign a scholarship offer since the vaunted Class of 2008 that saw four players go on to play collegiately.

“We were tickled. We were very excited,” Madison’s father, Marc, said. “When she was younger, she pretty much worked year round. And she has kept up her grades.”

A versatile player, Bozeman began her high school career as a pitcher before spending time in the outfield and later on the infield for the Lady Tigers.

“They liked my pitching and they want to see me in the outfield too, in center,” Bozeman said of what the JDCC coaches have told her about how her skills will be utilized.

Demopolis co-head coach Joey Browder, who has watched Bozeman for more than three seasons, believes that her versatility coupled with her selfless nature paved the way for her success.

“They are getting a top notch, unselfish, truly adaptable warrior. She has never batted an eye about doing what she has to do,” Browder said of Bozeman, who also made the transition from swinging away to primarily being a slap hitter during her junior season.

“You don’t see it a lot. But that is her nature. She wants to win and she is willing to do whatever it takes to win.”

For the Bozeman family, the moment marked the culmination of years of dedicated work.

“It means a lot because my daddy and my papa always wanted to see me play college ball,” she said.

“They did a lot to help me get to where I am today. To be able to make them happy is important.”

Demopolis offensive lineman Steven Foster followed through with a nearly yearlong commitment Wednesday when he signed with South Alabama.

A Class 5A all-state player and Alabama-Mississippi All-Star Game selection, Foster declined overtures from UAB and Duke to maintain his commitment to USA.

“Since I originally committed I really haven’t had any doubts on USA,” Foster said. “There’s always that buyer’s remorse with anything that you commit yourself to, but I made a decision through faith and that’s where I think my place in God’s plan for me and my future is.”

Foster, who committed to the Jaguars last spring as a junior, will look to grow with a program that is transitioning to NCAA Division I status. Over the next four seasons, the Jaguars will play a list of teams that includes North Carolina State, Mississippi State, Hawaii, Tennessee and Georgia among others.

Foster’s parents, Steven and Ralene, said they intend to attend as many of their son’s games as possible.

“Playing games like Mississippi State and Tennessee, that will give us a chance to go to some (away) games as well,” the elder Steven Foster said.

Despite his long-held commitment, Foster seriously considered every offer extended to him over the last year.

“Every school that offered him, he examined everything about that school, not just the football program,” head football coach Tom Causey said. “Steve was very mature in his decision-making process.”

“Signing day was great. It’s a weight lifted off my shoulders to finally seal the deal and put my name on that paper. All the hard work from day one paid off,” Foster, whose signing extended the Signing Day streak to four straight years for DHS, said. “It’s bittersweet because high school was great for me and, unfortunately, it’s about to end. But it’s also the start of a new beginning.”