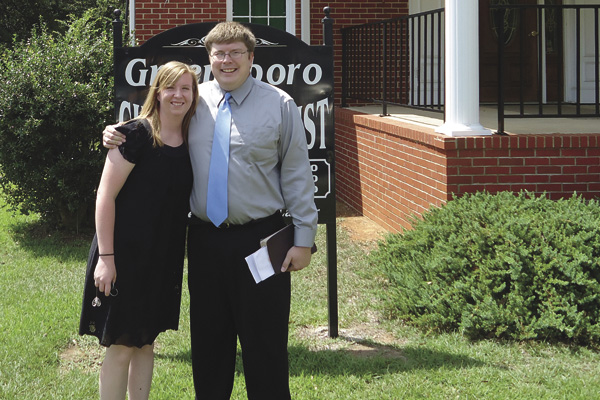 Jeremy Smith is a familiar face in the local sports scene.

He ought to be. He’s the sports editor for the Demopolis Times.

However, every Sunday since late August he’s put down his scorebook and picked up the “good book” to lead the congregation at the Greensboro church of Christ.

“My faith has always been something that is important to me,” he said, noting that the congregation at Demopolis’ Canal Heights church of Christ played a large part in his decision to move to Demopolis in 2008. “I felt comfortable in there, and having that comfort level made the transition to Demopolis that much easier.”

Smith is still an active member in the Demopolis congregation, having served stents in a Jamaican mission trip in each of the past two summers.

However, he’s transitioned from his seat in the pew in Demopolis to standing behind the pulpit in Greensboro on Sundays.

His aptitude to preach full time for a congregation was tempted in a handful of guest preaching roles and filling in as needed on an occasional Sunday in Demopolis, Linden and other places around the Southeast.

However, when the chance to preach full time for a congregation of his own became a possibility, Smith studied the opportunity.

“When Don Huckabee, one of our elders at Canal Heights approached me about Greensboro’s need for a preacher, I was very interested,” Smith said. “I had just gotten back from Jamaica where we had a very successful campaign by any standard and had experienced an incredible blessing in which I was involved in the conversion of three siblings in the same day, having gotten to baptize two of them myself. After getting back home, I wanted to find a way to better utilize the talents with which God has blessed me. Greensboro offered the perfect situation.”

Currently, Smith balances an odd-hour weekly work schedule while planning his Sunday sermons the day before, that is unless there’s sports to cover.

“It’s an interesting balance, that’s for sure,” he said of how he approaches planning his sermons with a work schedule that is in constant flux. “If there’s a game on Saturday, I’ll be there. I may have to write my sermon later that night or early that morning, but I just try to make all the pieces fit. It’s a challenge, but it can be done. There are some weeks I wonder how I am going to get it all together. Like this week. I have basketball games every night except Wednesday. And I work office hours during the day. So I’m not sure when I will sit down and really dive into my sermon. But it will happen. Between all the help and support I get from my wife and the unbelievable blessings I constantly receive from God, things always fit together just right.”

The Greensboro congregation meets only on Sundays, which affords Smith the opportunities to continue his newspaper career and remain active at Canal Heights.

“Being able to remain a part of the family at Canal Heights was very important to me. My wife and I have developed tremendous relationships with the brethren there and we were not ready to depart from that congregation just yet,” Smith said.

“The situation, while challenging, has been as tailor-made for me as I could possibly imagine. I am still able to continue my ‘day job’ but also have the opportunity to do something else I truly love.”