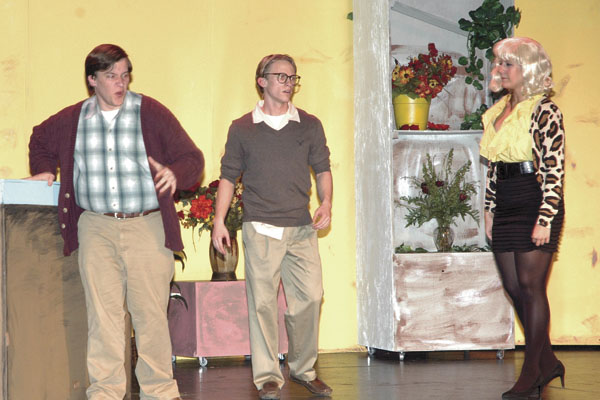 Curtains open this week for the Demopolis High School drama department as it holds its annual spring production. This go-round, the group will offer its rendition of the acclaimed musical Little Shop of Horrors.

“I felt like we had the people to do it,” DHS drama teacher Jody White said of the production, which opens Thursday at 7 p.m. “We have a lot of seniors we’re about to lose, so I wanted to do a show that would help feature our seniors.”

The cast of Little Shop features 14 members, a show that is about half the size of the 2011 spring production, Hairspray.

“We wanted to do a smaller, more manageable show this year,” White said.

The play, which features lovesick green thumb Seymour and his ill-fated attempt to impress Audrey, the object of his affections, offers a darkly comedic edge that places it in contrast to most recent DHS productions.

“They have really enjoyed it,” White said of the student thespians’ reaction to the material. “They’ve had a lot of fun. They like the humor in the show.”

In addition to the subject matter, the teenage actors and actresses have also been spoiled by more individual attention thanks to the size of the cast.

“I think they’ve enjoyed the fact that it is a smaller show,” White said. “They get a lot more intensive training.”

In preparing for Little Shop, the DHS drama department has again turned to a number of local talents to help make the production possible.

“Through funding from the Tiger Arts Guild, we’ve been able to bring in local artists again this year,” White said.

Through that funding, John Brown will serve as the show’s musical director. Laura Clements, who participated in the Canebrake Players’ rendition of Little Shop, offered vocal coaching to student performers while Kirk Brooker, who also took part in Canebrake’s take on the show, conducted a set painting workshop.

“We partnered with Canebrake and were able to work out an agreement where we could use their plants,” White said, referencing to the plants Lynda Ray made for the Canebrake production of Little Shop that were still in storage at the theater.

The construction of the set itself saw school resource officer Tim Williams oversee the efforts the drama program’s design students.

“I’m really proud of the fact our design kids were responsible for building the set,” White said.

Williams will run the lights for the show while, for the first time, a pair of students will make sure the sound is on point.

“This year we’ve really gotten into having the sound equipment run by our students,” White said.

The cast will see Andrew Gwin in the lead role as he brings to life the energetic, if not misguided, Seymour.

“His biggest challenge is that he has to have boundless energy,” White said of Gwin, who is in his final DHS performance. “Seymour never really stops over the course of the show. I think he has a sense of quality that you can’t really impress upon students. I think he has taken a lot of personal responsibility with his role.”

The female lead role is shared by seniors Mary Morgan Tucker and Gigi Perry, who will each portray Audrey.

“There are some differences in their vocal quality. Their singing style is a little different. Both of the voices really work with Audrey,” White said of the decision to allow the girls to share the role. “We couldn’t reconcile not giving them both a chance. I’m pleased with the way they’ve created their own characters and still been true to who Audrey is.”

For Tucker, the show is her eighth and final production at Demopolis High School, making her the most experienced veteran in the department.

“Mary Morgan Tucker is the only student I’ve had who has been in every production since her freshman year,” White said.

“He made his debut in Alice in Wonderland,” White said of Key, a senior who impressed in his first role with the department. “We really wish we could have snagged Jack earlier. He is just a really talented character actor. And he is a great mimic. And he and Andrew play off of each other so well.”

Little Shop of Horrors will be at the Demopolis High School auditorium at 7 p.m. Thursday night and Friday night and at 2 p.m. Sunday afternoon. Admission for all shows is $6.