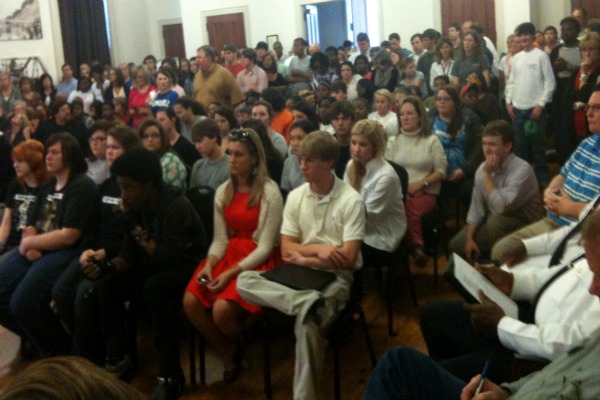 More than 150 students, parents, teachers and faculty gathered at Rooster Hall for the Demopolis council meeting Thursday night. Andrew Gwin (seated on the corner in the white shirt) was allowed to address the council briefly concerning principal Leon Clark's pending departure from DHS. This same group was denied the opportunity to speak to the city board of education at its meeting just an hour earlier.

The Demopolis Board of Education took no action Thursday night at a special called meeting as more than 150 citizens, parents, students, teachers and faculty crowded the meeting room in the central office.

The crowd was in attendance as a show of support for DHS principal Leon Clark, whose status with the school system beyond May 2012 is now clouded as he declined to sign a three-year contract extension by Wednesday’s deadline.

The board barely acknowledged the crowd as Superintendent of Education Dr. Al Griffin asked for a motion to enter an executive session four items into the agenda.

Board member Laura Foster motioned to go into executive session but board members Jim Stanford and Ronnie O’Neal expressed concern about doing so without hearing from the crowd in attendance.

Board attorney Alex Braswell addressed the crowd saying the board had no idea why Clark didn’t sign the extension.

“He called Wednesday, shortly after 5 p.m., and said ‘I’m not signing it’ and hung up,” he said. “That’s all we know. Mr. Clark had two days to express any concerns or ask any questions and he didn’t do that. He rejected the offer.”

That explanation did not sit well with the crowd who were never given the chance to formally address the board.

Despite attempts and requests by several in attendance, no one was added to the agenda to speak.

After a brief cordial exchange between Braswell and Andrew Gwin, a senior at DHS, the board passed the measure to enter executive session and the crowd herded itself to the parking lot. Stanford voted against the executive session.

The same group traveled less than half a mile down the road where Gwin was given the chance to address the mayor and council at its meeting an hour later. Gwin said language in the contract, which has yet to be made public, inferred that Clark had not put “students and teachers first” and that signing the contract would be “a slap in the face.”  Gwin’s 210 second speech was met with a standing ovation.

The council noted that the BOE was a separate entity and that the council could not aid in negotiations to keep Clark at the high school.

However, Grayson did address the board, who was presented earlier with letters of support for Clark and petitions totaling more than 800 signatures, during its executive session.

Per the terms of his existing contract, or pending further action by the board, Clark will remain principal at DHS until June 1, 2012.