Community turns out to support Clark 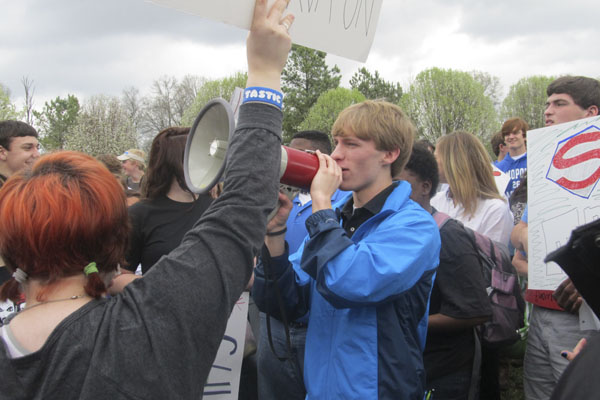 Community reaction in the wake of Leon Clark’s refusal to sign a contract extension has been swift and profound this week.

Clark received a contract offer from the Demopolis City Schools Board of Education Monday and was given until 4 p.m. Wednesday to sign the three-year extension.

“I do not feel I can sign my contract as written,” Clark said in a prepared statement given to The Demopolis Times Wednesday evening. “I have no further comment regarding it.”

As details of that contract offer have emerged, reaction on the part of teachers, students, parents and other community members has come in significant forms over the last few days.

“Since his hiring, Clark has worked tirelessly around and for Demopolis High School. This is no secret. On Friday nights, he’s at every football game. On Saturdays, he’s watching baseball or softball, while checking in on the current theatrical production going on in the new theater. On Sunday afternoons, he’s seen weed-eating around the school sign near the entrance on US Highway 80,” Demopolis High School alumnus Stewart Gwin, the founder of the petition, wrote. “Clark is not only a principal. Clark is a servant. Clark is a community role model. Clark is a selfless motivator for students of Demopolis High School, and nearly any student you ask will tell you so. Demopolis High School cannot afford to let such an incredible role model and leader to these students to slip away. Doing so will threaten the character of not only our graduates, but our community.”

In addition to the signatures themselves, many signees added comments regarding their feelings on the Clark situation.

“The high school is the focal point of all local education systems. Mr. Leon Clark has exemplified the leadership skills necessary to balance discipline with a sincere and caring attitude to the students, teachers and staff of DHS and others that he has contact with,” Arthur Evans wrote in his post. “He is an asset that we must retain in order to continue to have the school system we expect to have!”

“I have rarely met anyone who cares so deeply about his job,” Traci Spiller wrote. “He does everything in his power to help our teachers and students succeed. Since I still have a child in high school, I will be devastated if we lose Mr. Clark.”

Other parents expressed similar levels of concern, citing Clark’s commitment and manor as strengths that put him above his peers.

“In the short time that I have known Mr. Clark he has proven to be a great all around principal. He has earned the respect of the students and parents alike,” Lucy Chu, mother of DHS freshman Jeremy Chu, wrote. “It is not often that one can win over a school filled with teenagers from all different backgrounds. He is there for every function for the students and goes beyond his scope of responsibility time and time again. It is a disservice to the community that this is even up for discussion. The schools are doing well and they should be left alone. I am sure there other more important matters that need the attention of the board.”

Others, like former DHS student Ashley King, recanted more personal recollections of dealings with Clark as evidence of his character and competence.

“I am a former student of Demopolis High School. My class graduated May of 2011. I unfortunately did not get to walk,” King wrote. “But Mr. Clark did all that was possible to get me to where i could walk across that stage with a Demopolis High School diploma in my hand. I had to drop out of school in October 2010 because of the birth of my daughter at 27 weeks gestation (that is three months premature). Mr Clark tried to get me to stay in school but my daughter was in the hospital and I couldnt handle the stress of being away from her. Even though I couldnt stay in school Mr. Clark and a few other faculty members pushed me to get my GED and succeed like they knew that i could. Mr. Clark explained it to me like this: I could still do good in my life and he believed in me. If that isnt a good principal then you need a wake up call.”

The 430 online signatures coupled with the paper petitions signed by DHS parents, students and teachers brought the number of names to nearly 1,100 as of Friday evening.

Students in attendance at Thursday afternoon’s special called board of education meeting gave the physical petitions along with stacks of letters to BOE members. After the crowd of more than 150 people in attendance were denied the opportunity to voice their frustrations and opinions to the BOE Thursday, the group made its way to the Demopolis City Council meeting just more than an hour later.

Many of those same individuals found were involved in another protest Friday morning as the majority of the student body at Demopolis High School exited the building during break and proceeded to occupy the front lawn of DHS.

“It is not right what they are doing to him. He is the best principal we have ever had,” Justin Vail, a junior at DHS, said plainly before returning to the building.

The Demopolis City Schools Board of Education is scheduled to hold a special called meeting Monday, March 12 at 4 p.m.