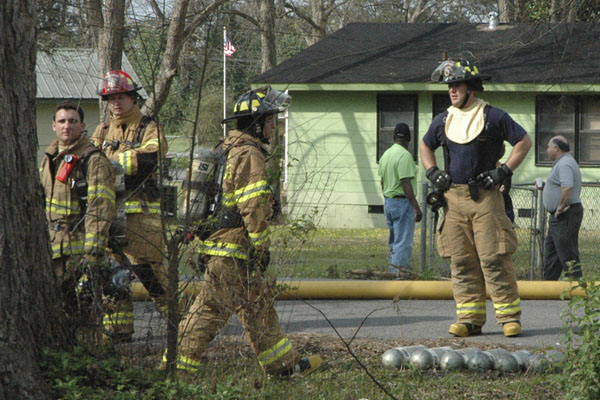 The Demopolis Fire and Rescue Department spent most of its Friday assessing itself as it underwent its annual incident exercise.

The training took place at 914 Fourth Avenue in Demopolis Friday morning, a former residence that was set or demolition before the DFRD acquired the facility to be used in the training.

“Earlier in the week, we set aside three days that we went over and did job performance reviews that covered forcible entry, ventilation, rescue,” Johnson said. “Today, through incident management, we set up command and simulated how we would operate through actual cause. It gives us a chance to see how we respond in a controlled environment.”

“It lets us see deficiencies. Our guys performed very well,” Johnson said. “We were able to visualize, go through the steps that we need to do and be able to evaluate them right there. We didn’t have a lot of corrections. Everybody did very well.”

“The incident management system gives you set protocols that you go through. Once you perform them, the command board gives you a visual that this has been performed and is checked off,” Johnson explained. “We’re trying to make sure that we get incident management the same for three shifts, which makes us a complete department.”

Johnson said the department has an indordinate number of firefighters working on multiple shifts, making it more necessary than ever to preserve the integrity of communication department wide.

“I’m making sure we’re running the same. It keeps us consistent, keeps us from creating confusion. The guys performed almost flawlessly today. They did really well (Friday),” Johnson said. “Incident management is not only good for fires. It is good for tornadoes, hurricanes, parades, large events. It is a scalable process. If we had a large scale tornado here the did a lot of damage, you’re going to need administration, finance, liaison, staging areas. A lot of people don’t realize this is a mandate from the president that we’re following. It works. We’re here to give the citizens the best we can.”