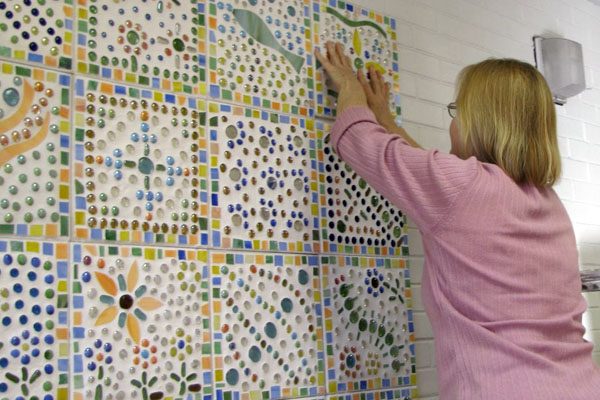 Students and U.S. Jones and Westside celebrated the stories of the heralded Gee’s Bend Quilters recently by following fairly closely in their footsteps.

Retired nurse and self-proclaimed folk artist Linda Munoz recently helped students at both schools construct a mosaic tile quilt which has been hung prominently in the schools as part of “Patchwork History: Stained Glass Project.”

Children at U.S. Jones were able to construct small patchwork pieces from construction paper to take home, but took part in a much larger scale project that now is a prominent art display in the school’s lunchroom.

“Every student in the school participated,” Munoz said. “Each class worked on a 12-inch by 12-inch wooden panel.”

Once the panels were assembled, the end result became a 5-foot by 5-foot stained glass work that resembled a Gee’s Bend quilt.

Leftover pieces of glass were used by the enrichment class and ultimately became the top of a concrete bench.

A similar quilt project was undertaken at Westside although the quilt ended up being somewhat smaller.

“There are 32 squares,” Munoz said. “Each child was involved in it but since they are smaller, we ended up making the quit a little smaller.”

That stained-glass quilt now hands in the lobby at WES.

Each lesson was integrated with lessons about the quilters and their influences, both cultural and historical. Students also learned the elements of design and how the quilters use these elements.