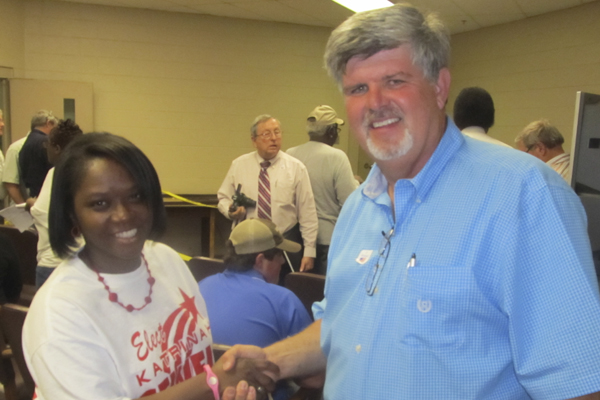 With two longtime incumbents vacating their respective seats, most anticipated a hotly contested race for the county’s circuit clerk and probate judge offices.

However, what was expected to be interesting water cooler fodder Wednesday morning turned into a slugfest Tuesday night that will spill over into an April 24 runoff.

Katrina Sewell and Kenny Freeman were neck and neck most of the night in their quest for Rusty Nichols’ circuit clerk seat with Sewell taking an early lead that she would not relinquish all night.

“The campaign has gone exceedingly well for me I do believe,” Sewell said of the race that has gotten her to the April runoff. “I am grateful for the support I received.”

Sewell and Freeman both indicated that their campaign strategy during the runoff would be virtually identical to the jockeying that led them to their current stalemate.

“Working hard. We’re headed for a runoff,” Sewell said. “I’ve worked against a fine group of people and it has been exciting.”

“This is a first for me,” Freeman said. “Everybody has been so nice. I’m humbled by this. Just going to hit the ground running and get to work.”

Kevin Jacobs settled into fourth place with 586 votes with Toby Henderson right behind with 388. Next was Bill Barley with 309 votes and following him was Scott Parten with 274 votes and Mike O’Neal with 35.

For McIntosh, her predominantly grassroots campaign will continue through most of April as the self-described people person continues her quest to meet voters and gain support.

“A lot of people I’ve already met before,” McIntosh said. “It wasn’t a hard task because I love all people.”

McIntosh found herself surrounded by many of those people Tuesday night as she waited for the final numbers to arrive.

“It means a lot,” she said of the support she has gotten thus far. “My family and friends have come together. We’ve worked together to get to this point.”

Commission District No. 2 will also carry into April with a showdown between top vote-getter Chris Petrey (513) and Ben Sherrod (455). David Freeman hung in for a close third with 422 votes.

Commissioner in District 4 was the only local race settled Tuesday night with Calvin Martin romping to a 720 vote win over Emanuel Gary, Jr.