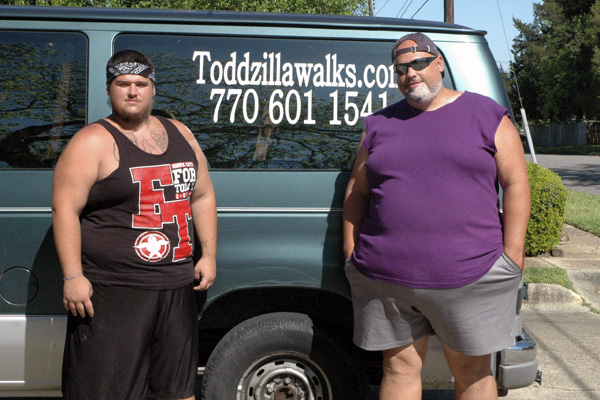 When the housing market crashed, it took Todd Gouge’s career as a contractor with it.

Gouge, a Georgia native, tried installing sound systems and other odd jobs but never hit on anything viable.

“You ever feel like everything you do, no matter what it is, just turns out wrong,” Gouge asked. “Even if you did it the right way, it just comes out wrong? That’s where I was.”

So, out of luck, on Jan. 15, Gouge went for a walk. A walk that brought him to Demopolis Friday afternoon.

Gouge, along with his son, Colin, has been walking 10-12 miles each day on their cross-country march with hopes to find himself and to better himself spiritually, mentally and physically.

“I figure a 400 pound guy who can walk across the United States can do anything,” he said. “Nobody’s going to stop me.”

Todd said he also hopes his journey inspires other people to follow their dreams.

“America is a nation of dreamless people,” he said. “I want to remind people to chase their dreams.”

The trip is about to carry the Gouges into their fourth state and they said the journey has been enjoyable thus far.

“It’s been great,” Todd said. “There’s a lot of cool people out in the world and we’ve met some interesting characters.”

The average day for the two begins at 7 a.m. They eat breakfast and set out for another day. The two are generally on the road by 8 a.m. but stumbling upon one certain thing can delay their morning trek by about an hour.

The Gouges use Internet access to catch up with current events, scout their upcoming destinations and interact with friends, family and followers.

They have nearly 500 people following their adventure on Facebook.

The Gouges, who have set up camp at Foscue Park, plan to attend Easter services locally before giving up their campsite and heading west down Highway 80.

“We’ve got a pretty good set up here (at Foscue),” Todd said. “If there’s not a campground around, we’ve knocked on doors and talked to people and asked to stay in their yard. But the majority of the time we spend the night in Walmart parking lots and sleep in the van.”

The trek has even drawn some comparisons to a similar, albeit more famous journey.

And everywhere they stop, they speak with people, searching for the “Spirit of America” and capturing their interviews on video, which they upload to their website, www.toddzillawalks.com, and YouTube and Facebook pages.

The walkers expect to reach their destination in September.