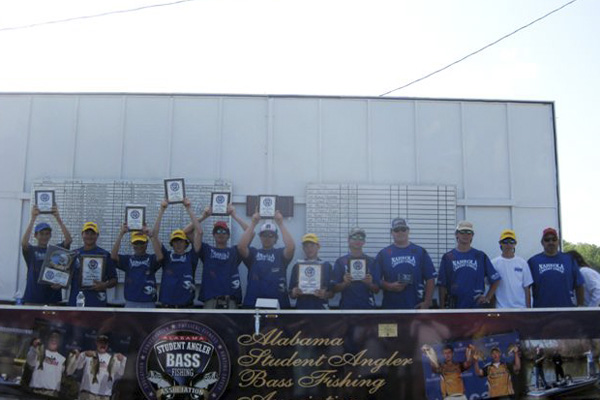 The Demopolis Student Anglers finished first as a team in the event with eighth graders Jacob Rodrigues and Will Webb placing the highest among the five Demopolis boats in the competition.

Rodrigues and Webb hauled in five fish weighing in at a total of 12.26 pounds, just .14 pounds off the tournament-winning team of Cole Mayo and Madison Hayes of the Southside Fishing Club. Rodrigues and Webb pulled 299 points for their finish.

Demopolis placed four of its two-man teams in the top 10, an impressive feat considering that 104 boats from 39 teams participated in the event.

Vince Moseley and Gunner Smith of the DSA team pulled in 10.29 pounds to take sixth place while Rob McCarter and Clay White of Demopolis hauled in 10.2 pounds for seventh place.

Demopolis also saw Kyle Woodruff and Chandler Stuedeman pull in 9.59 pounds for ninth place in the field. Cole Suttles and Thomas Cramer finished easily in the top third of the field, pulling in 5.51 pounds and taking home 270 points for the Demopolis team.

The tournament haul was enough to put the Demopolis Student Anglers into the top five in the state rankings.

“Our team is fourth overall in the state right now out of 39 teams,” DSA founder and coach Walton Roberts said.

The tournament marked the third of the year for the Demopolis Student Anglers, who saw one team finish as high as fourth place at a tournament on Lake Martin in February before another finished 11th at Eufaula in March.

“I’ve been pleasantly surprised,” Roberts said of the fledgling team, which is still in just its first year of existence.

“They’ve taken to it well. All of them are pumped up about it. Some of my guys are fishing everyday trying to get better at certain techniques.”

While the team does not have the defined daily practice time that other school sports offer, Roberts and his fellow coaches and sponsors do make it a point to help the young anglers get better.

“We have a meeting every week that is an educational meeting,” Roberts said of a practice that has seen programs ranging from guest speaker such as Boyd Duckett to water and boating safety lectures. “My group has really taken to that. It shows in the end. We’ve done real well.”