Parrs awarded for 70 years with Chevron 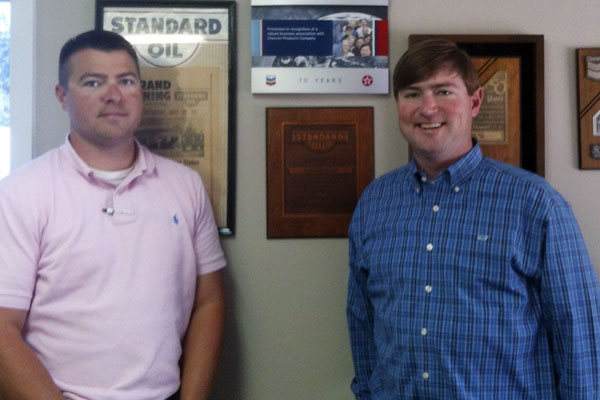 Demopolis-based Parr’s Inc. was recently awarded for 70 years of service and affiliation with Chevron.

While the family business now rests on the shoulders of its third generation with brothers Jim and Joe, the siblings are quick to disperse the credit for the businesses success.

“It starts with our grandparents,” Jim said.

“They laid a strong foundation,” Joe added, “followed by our mom and dad.”

After that the brothers know much of the rest of the credit lies with people who do not share their last name.

“We’ve got some really great employees,” Jim said, “and we’ve got very loyal customers. Those two things right there are a big, a really big, part of it.”

The Parrs said they have worked hard to make their stores stand out with well-maintained facilities and manicured landscapes and by offering high-quality customer service.

Annually, Parr’s Inc. has been one of the most ardent supporters of many of the city’s local endeavors including the Demopolis City Schools Foundation, many civic groups and organizations, youth league and high school athletics, the Demopolis Area Chamber of Commerce and Christmas on the River, just to name a few.

While nearly every business has experienced significant change in the past 70 years, the price of the Parr’s primary good is probably one of the most obvious. However, Jim said there is one fairly common misconception when it comes to the cost of gas.

“We hate gas at nearly $4 per gallon as much as everybody else,” he said. “Four dollars per gallon is not good for anybody.”

With more dollars going into the tank, fewer customers come inside for drinks and snacks. Add in hefty credit card fees from the terminals on the pumps, and consider that 41 cents of every gallon are taxes, selling gas can leave little room for profit.

“Honestly, over the years I don’t think the (profit) margin has changed a whole lot,” Jim said. “Sure, the fuel costs more at the pump but it costs a lot more to refine it, to transport it and everything else.”

The Parrs own 10 stations across West Alabama and operate eight. They supply an additional 10 stations with fuel and service a multitude of farming and commercial accounts.

“We just can’t thank the community, our employees or our customers enough,” Joe said of the support the family has received the past 70 years.